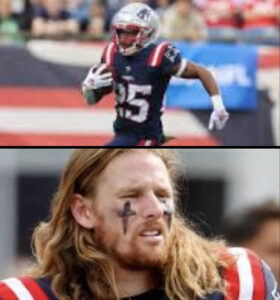 While the 2022 season was ultimately one to forget for the Patriots’ special teams unit, two new guys did make quite an impact.

Both Brenden Schooler and especially Marcus Jones were positive additions out of the rookie class and both of them were rewarded for good seasons by being voted to the Pro Football Writer’s Association All-Rookie Team, which was revealed on Tuesday.

Schooler quickly made his presence felt in training camp. Each day, he would stand out in some way, shape or form and almost forced Bill Belichick’s hand in terms of earning a roster spot with his versatility. Working with Matthew Slater daily, Schooler became a very, very good coverage guy on punts and we all remember the fumble recover he had against Pittsburgh.

Then, of course, there was Marcus Jones. Whether he was lining up as a receiver, or a defensive back, or bringing a game-winning punt back against the Jets, he was arguably the most dynamic player on the team aside from Rhamondre Stevenson or Mathew Judon.

Both guys were well-deserving recipients of this honor and hopefully it gives them another shot of confidence to raise their games to another level in 2023.

Below is the entire PFWA All-Rookie Team