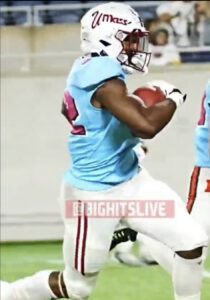 Wearing ‘UMass’ on the side of his helmet one final time during the Tropical Bowl showcase game on Saturday, running back Ellis Merriweather had a special performance.

Merriweather was the only consistent part of the program these last several years, so his ability to show out on a national stage wearing the ‘U” one more time was fitting. Not only that, but with 31 of the 32 NFL teams having scouts in Orlando as well as the XFL and USFL, you’ve got to imagine more than a few of them will go back to their respective teams and say “we need to get a better look at him” or, “he can help us immediately,” because both statements are true.

Merriweather tweeted out a picture of the award and wrote the following in the post:

“It was a blessing to be able to participate in the Tropical Bowl representing UMass football. Walked away with co-offensive MVP Award. God is great.”

Perhaps the biggest development for Merriweather this weekend as it pertains to any opportunity he may receive from a team in any of those leagues was his willingness and ability to line up and produce at receiver. Every showcase week is an opportunity for a staff to see just how versatile a player can be, so the American Staff – led by head coach Todd Littlejohn – got to see how productive the big back could be as a pass catcher as well. He’s already a good pass protector and runs like a moose downhill with the ball, so it had to ultimately impress everyone on hand.

Whether Merriweather plays at the next level or goes a different route and works in the media or athletics in some capacity – something he dove head first into while in Amherst – his attitude above all else will allow him to succeed in whatever he does.