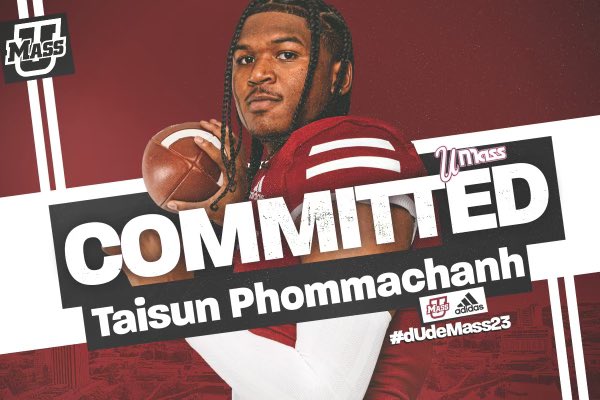 Walking by FAITH not by sight ❤️‍🔥 pic.twitter.com/qddo5Jb2qP

The former four star recruit and Clemson commit was a redshirt sophomore at Georgia Tech last season. Phommachanh played sparingly completing 2 of 5 passes for 13 yards with an interception. He rushed for 56 yards and two touchdowns on 15 carries.

The 6-3 207 quarterback is a native of Bridgeport, Connecticut and the brother of UConn quarterback Tyler Phommachanh. He comes to UMass with two years of eligibility.

Phommachanh will more than likely compete against junior Brady Olson, redshirt junior Gino Campiotti, grad transfer Carlos Davis and incoming freshmen Ahmad Haston for the starting job. Campiotti was the starter for most of last season but Olson also played and overtook Campiotti for the starting job down the stretch.

Landing Phommachanh is huge for UMass. He but he hasn’t gotten the opportunity to truly show what he can do. Now he will and he has a good chance of being the starter for the Minutemen.

Phommachanh is wiry but athletic. He shows good touch and anticipation on his deep ball and has the arm strength to fit the ball into tight windows in the RPO game. He is a good runner who is effective on designed runs or read plays.

UMass has once again been active in the transfer portal this off-season. Going into the off-season, many felt that quarterback needed to be a target area. The Minutemen might have just found their quarterback in Phommachanh. Let’s see if can win the starting job and become the guy.

Phommachanh is the second quarterback the Minutemen have added in the portal this off-season. The affore mentioned Carlos Davis, a grad transfer from Western Carolina also came in earlier this off-season.