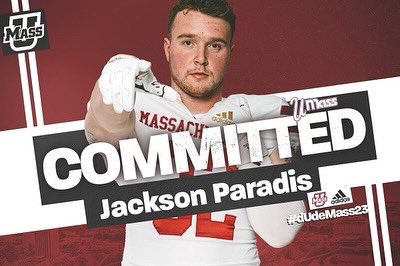 UMass continues to hit the transfer portal hard, and the Minutemen found their first running back of the cycle.

Jackson Paradis, a New Hampshire native, made the switch from Buffalo to UMass, as he announced today over Twitter.

Paradis originally signed with Buffalo last year coming out of the Tilton School. Paradis was one of the top players in the NEPSAC, as he was named the 2021 New Hampshire Gatorade Player of the Year. In his senior year at Tilton, Paradis rushed for 1,851 yards and 23 touchdowns.

The 6-foot, 220-pound Paradis is the lone running back recruit for UMass this cycle. The Minutemen signed six high school recruits in December, and have 12 coming via the transfer portal.

Paradis is rated as a three-star prospect by 247sports.com.