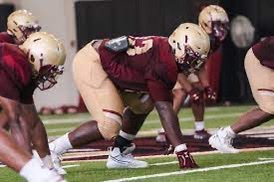 While all of the attention was on how bad the BC offense was last season, the defense rarely got enough credit for the job it did.

When you’re 3-9 that’ll happen, but the NC State upset and other games BC stayed in – at least for a little while – were mostly because of the defensive performance. If there was a single positive from last year, it was Tem Lukabu and the way the Eagles showed up on that side of the ball week in and week out (maybe except for the Notre Dame game).

On Thursday afternoon, one of the key pieces of that defense over the last few years, big man Chibueze Onwuka put a post on social media declaring for the NFL Draft. Onwuka wasn’t recruited in high school, never getting a single offer. Still, he found a way to become a run stuffing force for BC, particularly during this 2022 campaign.

Now, his Hollywood-esque story will hopefully continue at the next level, whether he’s drafted or picked up as a free agent before training camps open up. Someone should have a spot for him.

“College football was one of the most unexpected life changing experiences I am blessed to have been part of,” Onwuka wrote in the post. “Coming out of high school without any stars or college offers would’ve been enough for many people to turn away, but my circumstances provided me with nothing but a chance to write a story that I wanted to.

“Thank you for the continued support and encouragement in everything I do. Coming to a new country together has made us grow inseparable bonds. I would not have made it this far without you guys. While at BC I had a chance to make bonds that I hope last a lifetime. My experience wouldn’t have been the same without my teammates, through thick and thin you guys stuck with me and supported me. I wish you all the best in your future endeavors.”

This staff may have gotten a bunch of things wrong this year, but one of the things they’ve nailed since Hafley took over is identifying guys you can rely on and strapping the rest of the team to their back. Onwuka was one of those guys on defense alongside Marcus Valdez. Onwuka was obviously appreciative of that trust and closed his post acknowledging those that believed in him.

“These past few years has put me through every emotion,” he added. “Coming in as a transfer you never know what to expect, but every day that I spent at Boston College made me realize that there is a place I can maximize my abilities athletically and academically. I would like to say thank you to Coach Vince for helping take my game to the next level, without your help and continued support I do not think I would be the player I am today. To Coach Matusz, thank you for always holding me to the highest standard and helping me improve my leadership abilities, your care and dedication are truly one of a kind. To Coach Hafley and Coach Tem, thank you for believing in me and giving me an opportunity to be the anchor of the defense. To the rest of the support staff, thank you for everything you’ve done to make my experience at BC one of a kind and one I will never forget.

“With that being said, I would like to announce that I am declaring for the 2023 NFL Draft.”