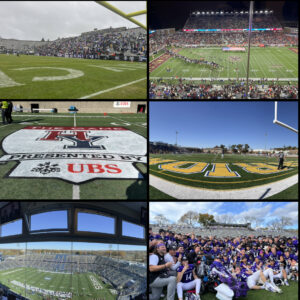 What a year it was for the 16 local Division 1 programs.

Seemingly every single week, Holy Cross remained the hottest story in the region and even nationally, while UConn became the biggest surprise of the season. BC’s ugly year was stunning to watch unfold, and both the CAA and the Ivy League lived up to the hype with some wild races that came down to the final day of the season. Even Stonehill arrived on the scene in impressive fashion and Merrimack showed its close to becoming a national championship threat.

With so many amazing moments to choose from John, Adam and I all picked our Top 3 moments in New England college football this year. Enjoy and let us know if we missed any!

2. Brown upsets Penn: Bruno got the signature win James Perry and his staff were waiting for. The Bears have struggled in recent years but beating Penn, who was in first place in the Ivy League at the time was a big win for a program still rebuilding.

3. UNH beats Maine in a thriller: The Wildcats capped off an improbable turnaround season by beating the rival Black Bears 42-41 in overtime. The win gave UNH a share of the CAA and it clinched a spot in the FCS playoffs.

-I’m cheating here and adding one honorable mention because I had to get it in…Merrimack’s win over Sacred Heart. That was also one of those games where you could feel just how much it meant for the program and sort of felt like a turning point moving forward. Epic atmosphere that day in North Andover for a game that came down to the very last play.