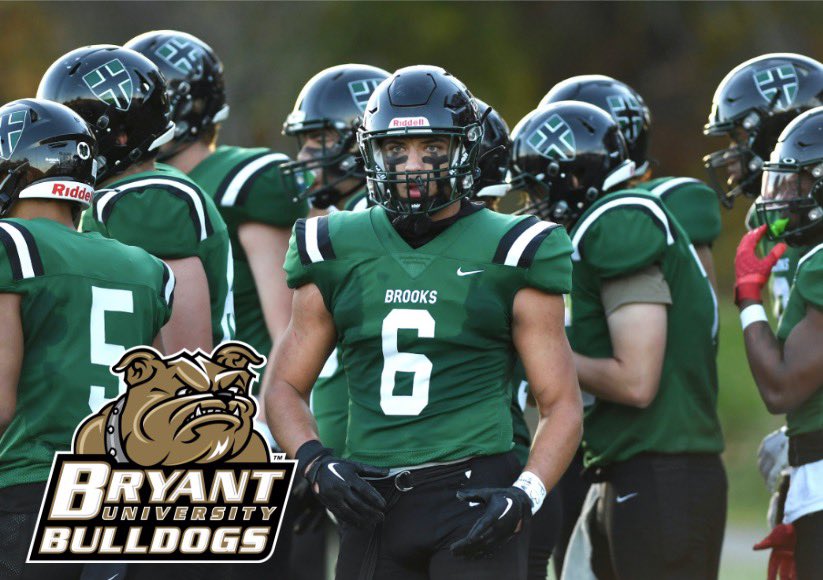 The Bryant Bulldogs picked up a big 2023 commitment on Christmas Eve when Brooks linebacker Jackson Connors-McCarthy committed to the school.

McCarthy had originally committed to Buffalo but decommitted earlier this month. The Early National Signing date came and went and Connors-McCarthy was still undecided.

That all changed on Saturday when Connors-McCarthy announced that he is committing to Bryant to play for head coach Chris Merritt and defensive coordinator Anthony Barese. He held seven other offers from Akron, URI, UMass, UNH, Buffalo, Fordham and Merrimack but Merritt and his staff were able to sell Connors-McCarthy on their vision for him and the program.

When I reached out to Connors-McCarthy for a comment on his decision, he cited the Bryant coaching staff and playing at home a the two biggest reasons for committing to Bryant.

“ I’m closer to my family. Coach Siewala, Coach Frost-Dixon and Coach Barese did a great job explaining the role I’d have on their defense and I want to play for them. In the long run, I feel like Bryant puts me in a position to accomplish what I want to get out of life the most. I’ve been underrated for a while and I’ll learn and improve there, and hopefully get the chance to do something great.”

Bryant will be losing two prolific all conference performers in linebackers Joe Andressen and Ryan Sadler. Both will be big losses and tough to replace but Connors-McCarthy represents a good long term replacement for the Bulldogs.

At 6-2 215, Connors-McCarthy has good size, plays with good instincts and is athletic. He has the potential to come in and play right away.

Bryant is coming off of a disappointing 4-7 season but the Bulldogs return several key contributors from last season and the roster has been augmented with a strong recruiting. It is a good time for Connors-McCarthy to be entering the program.