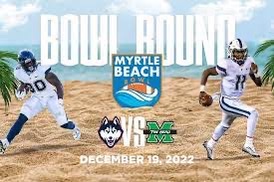 It’s hard to believe, but UConn is just a few days away from its bowl game against Marshall.

Monday afternoon down in South Carolina, the Huskies will try to go 7-6 and complete a truly remarkable season on a winning note when Jim Mora’s crew faces Marshall in the Myrtle Beach Bowl.

Ahead of that game, we thought it might be interesting to take a look at what the Thundering Herd are saying about their opponents leading up to that 2:30 kickoff on December 19. So, here’s what Marshall head coach Charles Huff had to say earlier this week…

“You guys (media) got the riviera of the West Virginian vacation destination. I’m excited I think, when you really look at it, we talk about the Marshall family and how they’ve flocked to Myrtle Beach, I think it’s really West Virginia in general. I think there’s going to be a lot of West Virginians that’ll be rooting for Marshall come Monday.”

ON PREPARATIONS AND THE BYE WEEK(S) AHEAD OF THE GAME

ON THE PROGRESS THEY’VE SEEN FROM UConn

“You guys (the media) use that word a lot, I think it’s called development. I think that’s what ultimately happens. We don’t get to control when the development starts or when it shows up. I think if you watched…you know, I’ve watched every game, and all three sides of the ball, you watch over the course of the year and they just kind of got better, and got better and got better. I think with a new coaching staff and new schemes, there’s a little bit of ‘ok, coaches, we want to do this and here’s what our players can do,’ and as the season goes on, you’re able to do more. I think when you watch the games as the season goes on, you kind of see development. You see players getting better, you see consistency in their performance. You start to see things they’re really good at. There’s some things they did earlier in the year that maybe personnel wise, or just understanding what they were trying to do wasn’t there, but as the year went on you could see them build confidence with certain things schematically.

“You could see some of the players improve. I think the quarterback has done a great job of improving. The O-line has improved. Defensively, they play with a lot of confidence. I think they play really hard. I think Coach Mora has built an NFL kind of system or mentality where ‘hey, we’re going to play really good in all three phases and we’re going to make you beat us,’ it’s the NFL model where they’re going to put players in good positions to make plays. They’re impressive. They play hard. There are games that they’re out of and they’re still running to the ball, still scheming offensively and defensively from a coaching perspective. It’s going to be a good challenge. I like the fact that we don’t know them as league opponents, I think that creates a challenge to your process.”