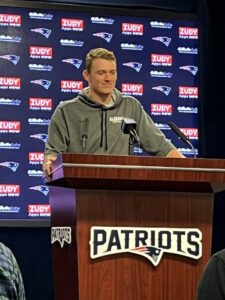 While the offense continues to try and figure out its identity as time quickly ticks away, there’s another element to keep an eye on down the stretch when it comes to Patriots quarterback Mac Jones.

While Jones was fine last year and seemingly never really hit the “rookie wall,” the team did struggle down the stretch and backed into the postseason. We’ve always heard about that sophomore slump and whether it’s the coaching around him or just a drop in play in general, it’s clear that there’s been a regression for Jones this year. Now, as we enter the part of the season where just two years ago Jones would have been preparing for a bowl game or the College Football Playoff, he now faces a daunting task of trying to get this team to the playoffs. We all believe Mac Jones is great with the mental side of football, but does he have what it takes physically to remain engaged and playing his best when it matters most?

These final five weeks will go a long way in answering that question, as well as the question of whether or not he can be a franchise quarterback.

“Yeah, I think that comes back to your preparation in the offseason and throughout the season,” Jones said on Thursday when asked if he learned anything this time of year in 2021 that he can use now to make sure he’s physically and mentally ready for the final five games. “The NFL, towards the end of the year, a lot of guys get hurt and things like that and a lot of it’s out of your control, but the other stuff you can control, the nutrition and keeping up with your body and continuing to lift and workout and stretch and do everything that you can. Not that we didn’t do that last year, but obviously this year we want to have a strong finish.”

Jones’ ankle injury earlier this year was the first time he’s had to miss any games, but the way the offensive line has played this season means he’s always just one blitzing linebacker or safety away from possibly bringing Zappe Fever back into the discussion. Jones believes he’s ready for the final playoff push and it’s a smaller, day-to-day focus rather than the bigger picture outlook that will help get him across the finish line in year two.

“Just focus on the nitty-gritty, the small goals and let that dictate some of our results,” Jones added. “Where if you give everything you’ve got, you did everything you could, the little things, the big things and then eventually, the end result, hopefully, will be a lot better.”