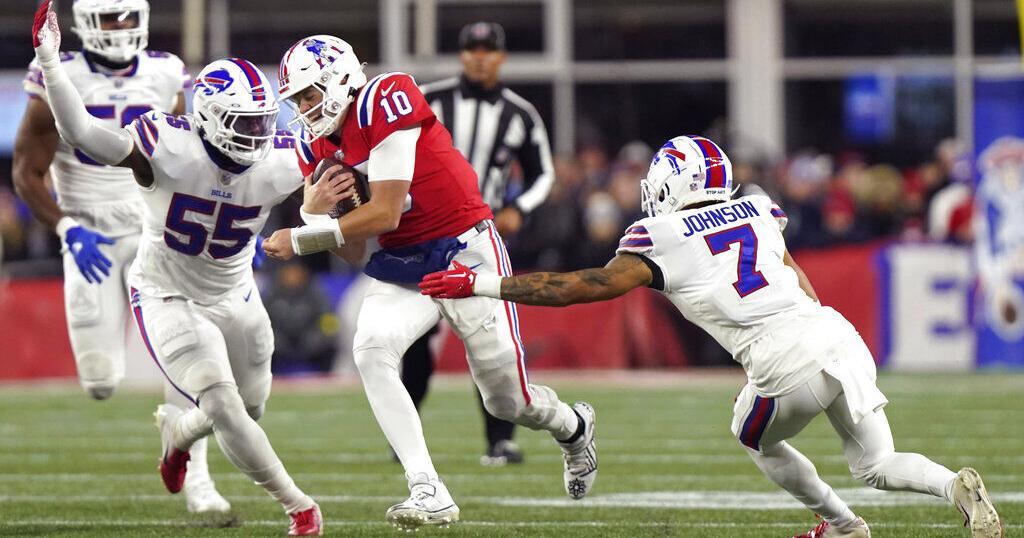 For 20+ years, fans could easily dismiss any threat from the lowly, laughing stock franchise, but not anymore.

Thursday night’s primetime matchup wasn’t as ugly as the playoff game a year ago, but it wasn’t much better as New England fell 24-10 to its division rivals. The offense showed zero ability to move the ball again and while the defense did its best to slow down Josh Allen, Stefon Diggs and co. they simply couldn’t.

Buffalo held the ball for 38 minutes while New England had it for just 21. The Patriots were 3-for-12 on third downs, while the Bills were 9-for-15. The Pats also had just 242 net yards compared to Buffalo’s 355. This is also the first time the Bills have beaten the Patriots in three straight meetings since 1994.

Now sitting at 6-6 overall while Buffalo is 9-3, almost all hope for a division title is out the window and a playoff spot is now very much in question with five games remaining, including a west coast trip the next two weeks.

“Not really too much to say here, obviously just didn’t do enough tonight,” said Bill Belichick. “Give Buffalo credit, they’re a good football team. We just couldn’t do enough. We had some opportunities…nothing in particular, just in general just not good enough in any area.”

The Pats offense had an ugly three-and-out to open the game and should have been taken as a sign of things to come. The first possession included a fumbled handoff exchange between Mac Jones and Rhamondre Stevenson on third down. Buffalo moved down to the Pats’ 33 its first drive, but penalties and a Josh Uche sack ultimately forced a Tyler Bass 48 yard field goal for an early 3-0 Bills lead.

For those clamoring for more creativity from the Patriots offense, the calls were answered on the next drive when Marcus Jones – yes the defensive back/punt returner – lined up out wide, took a quick screen pass from Mac and did the rest, sprinting 48 yards down the left sideline for a touchdown to give New England a 7-3 lead with 4:46 left in the first. That was about all we’d see for creativity the rest of the night though.

Facing third down near midfield its next possession, Buffalo was the benefactor of a questionable PI call on Jack Jones to extend things. The very next play, James Cook rumbled 28 yards to the 15. Josh Allen (22-33, 223, 2 TD) had a short run to set up first and goal inside the five as the first quarter expired. On the very first snap of the second, Allen hit Diggs (7-92-1 TD) for an easy eight yard TD to put Buffalo back in front 10-7.

After a penalty on the ensuing kick off, the Pats were screwed from the start of their next drive, stuck at the nine yard line. Moments later, a hold and an intentional grounding call on the same play forced New England into third & 18 at its own one yard line. Stevenson forged ahead for 16 yards, but was two yards short of the first down and the Pats had to punt, with Buffalo taking over again at its own 44.

Methodically, Allen led the Bills on a 14 play drive that took 7:46 off the clock and ended with him rolling to his right, barely getting a throw off before stepping out of bounds. The throw found Gabe Davis in the back right corner of the end zone and after a Patriots penalty was declined, Bass kicked the PAT to make it a 17-7 game with just 5:27 left in the half.

The Patriots answered with a lifeless three-and-out and Buffalo took over again at its own 29 a little over a minute after the score. For the first time in a long time, the Pats’ defense answered and forced a Bills punt with just under three minutes left in the half, setting the offense up at the New England 15, but yet another ugly three-and-out followed.

Josh Uche had a potentially game-changing strip sack that Matt Judon recovered at the Pats’ 42 with 1:20 to go in the half, but odd play calling and clock management ultimately resulted in a 48 yard field goal attempt by Nick Folk that hit the crossbar, leaving the Pats with nothing to show for the turnover and a 17-7 halftime deficit.

“Definitely wasn’t good enough by me tonight,” said Mac Jones. “All you can do is watch the tape and see where we can get better, but playing catch up is hard. We didn’t want to do that all game and I didn’t do a good enough job getting ahead early making it work. Tough one, but hats off to the Bills for playing a good game.”

Buffalo moved the ball to the Pats’ 42 to open the third but eventually had to punt. New England began establishing more Stevenson, but the drive stalled when Jones was seemingly picked off on the sideline by Jordan Poyer. Oddly, it was ruled incomplete, but looking at third and 14 the Pats soon punted it right back with 8:26 left in the quarter, pinning the Bills at their own six.

The Bills chewed up the remainder of the third quarter, with Allen and Diggs connecting a few times for some big third down conversions. Finally, after 15 plays, 94 yards and 8:55, Devin Singletary punched in a one yard TD to push the lead to 24-7 early in the fourth. Folk added a late field goal, but Buffalo recovered an onside kick and took a few kneel downs to  put the game away.

“We’ve been talking about it these last two weeks, these games get bigger and bigger, so to fall short is disappointing,” added Devin McCourty. “We’ve got some time, we need to kind of regroup, reset, figure some things out and decide what the rest of our season is going to be.”