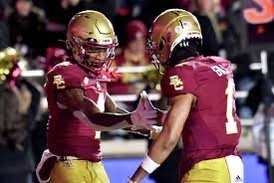 CHESTNUT HILL – Saturday night’s regular season finale at The Heights was pretty much a summary of how the whole season has gone for the Eagles.

Just when there was positive feelings surrounding the product on the field from time to time each week, something went wrong.

The Eagles led by four heading to the fourth quarter and pushed the lead to 11 early in the final frame in a matchup against Syracuse, but the Orange scored 26 unanswered points before a late BC touchdown en route to a 32-23 win.

The loss finishes an ugly season for the Eagles at 3-9 while Syracuse finished up at 7-5 and awaits its bowl fate.

“I’m proud of the way the seniors fought and played,” said head coach Jeff Hafley. “Obviously really disappointing in the fourth quarter, but I’m proud of the seniors. I wish we could have sent them off…it’s very emotional in the locker room right now. Those guys care and I appreciate all the hard work they’ve put in.”

Leading 10-6 at the half, the Eagles chewed up the first 6:27 of the second half with an 11-play drive, but ended up having to punt the ball away. Sam Candotti had his second punt of the night that pinned the Orange inside the five, but Syracuse drove 83 yards in 12 plays before settling for a 29 yard field goal to cut the deficit to 10-6 with just 1:34 to play in the third quarter.

BC moved 76 yards on the ensuing possession – thanks in large part to a throw that shows why Morehead is the guy moving forward – to Flowers for 30 yards down the right sideline to put the Eagles at the Orange 29. Moments later, Pat Garwo (25/88/1) bowled his way in from the five to make it 17-6 with 12:58 remaining in the game.

“Great game in terms of trying to find an identity running the ball,” Garwo said. “You’ve got to the the little wins and some of the big losses.”

The Eagles thought they forced a three and out immediately after, but an extremely questionable roughing the passer call on Donovan Ezeiruaku bailed the Orange out. Moments later, Devaughn Cooper hauled in a seven yard TD catch and the Orange crept back close despite a missed two point attempt, getting within five with just under 10 minutes left.

Cuse quickly got the ball back at its own 27 after forcing a punt. Just 50 seconds later on the third play of the drive, Damien Alford had a 58 yard touchdown catch to give Syracuse its first lead of the night. Another missed two point attempt made it 18-17.

Things soon went from bad to worse for the Eagles as Morehead was strip sacked at the BC 37 and Syracuse recovered with just over five minutes left. Sean Tucker put the dagger in with 2:29 left with a short touchdown run to make it 25-17. The Eagles turned the ball over on downs on the ensuing possession and Tucker officially put the game to bed with a 29 yard touchdown run two plays later.

With seven seconds left in the game, Flowers grabbed a four yard touchdown. Ordinarily a garbage time TD wouldn’t mean much, but it broke another record as Zay now leads all receivers in BC history with 29 career touchdowns. Flowers was visibly emotional as he walked off the field with the ball and hugged Hafley when he got to the sideline. The star wide receiver is destined for the first round of the NFL Draft and finished Saturday night with eight catches for 110 yards.

“I think Zay is a good example of what college football should be,” said Hafley. “He could have left this team for money, but he denied to stay and broke just about every record. Today he broke the touchdown record, but I think it’s bigger than that. He’s out there blocking and fighting and has tears in his eyes at the end of the game.

“Most guys in this situation would have opted out, but he went harder.”

The Eagles couldn’t have had a better start on senior night. Following about a 10-minute ceremony for the seniors, the defense came up with a strip sack and fumble recovery from Bryce Steele at the Syracuse 17  three plays into the game. The Eagles couldn’t a TD, BC did get points off the turnover with a 28 yard field goal from Connor Lytton.

After forcing a three and out, true freshman Edwin Kolenge blocked a punt, giving the Eagles excellent field position again at the Syracuse 15 yard line. Three plays later, Flowers set the single season BC record for touchdown receptions with his 11th on a nine yard pass from Emmett Morehead.

The Orange drove into field goal range on their third drive, but missed a 40 yarder. On the ensuing drive, Morehead hit Flowers with a bomb down the left sideline for 33 yards to move the Eagles to the Syracuse 29, but ultimately had to settle for a 46 yard attempt from Lytton that was wide right.

The defense continued to fly around and quickly forced a punt again late in the first, setting the offense up at the BC 42. The Eagles ran 13 plays on the ensuing drive, but mistakes ended up forcing BC into a third and 21 that wasn’t converted. Looking at a 47 yard attempt from Lytton, the Eagles had a false start and ended up punting,

Syracuse impressively went 96 yards in 12 plays and kicked a 47 yard field goal to get on the board. Two plays later, Morehead was strip sacked and the Orange recovered at the BC 15. A touchdown pass was negated by a holding call and following an ejection of Enrique Cruz after he threw a punch – more like two or three – at a BC player, Syracuse went for a Hail Mary on fourth and 35 that wasn’t completed. The Eagles moved into field goal range with a late two minute drill, but Lytton missed from 47 as time expired. Before the teams hit the locker rooms, a scuffle near the 45 ensued and players had to be separated as the chippiness continued.

After the game, Syracuse ran out onto the field with a team flag while running through some BC players and that set off another near-brawl that took several minutes to break up, with security eventually needing to get involved. It was an ugly sight to finish off an ugly season for the Eagles.

Many questions now surround this BC team in terms of who and who won’t be back next year, but one thing is clear…something needs to change.