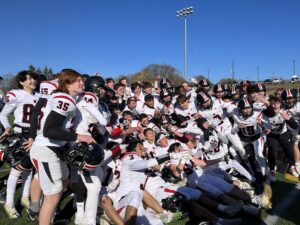 NEEDHAM – After a thrilling overtime game in the 134th edition of the oldest Thanksgiving Day public school rivalry in 2021, it was going to be hard to top the atmosphere that last year’s game provided.

Still, Needham hosted Wellesley on a beautiful and somewhat chilly Thanksgiving morning on Thursday for the 135th installment of the game and once again, it came down to the very end.

But, the game wasn’t over.

Referees determined the Rockets could have one untimed down, which meant the field had to be cleared off and the Raiders had one more defensive stand to make.Finally, after another lateral play didn’t result in anything, the Raiders sprinted onto the field again and straight towards the trophy waiting in the far end zone – the Frederick J. Gorman Centennial Trophy – and brought it back out to the field to celebrate a thrilling 24-17 win.

The victory is Wellesley’s fourth straight over their rivals and wraps up another great season at 8-3. Needham fell to 5-6.

“I saw the running back sneak out, he was wide open, so I just sneaked under it and I was gone,” said Jimenez of the memorable play. “It’s great, it’s a great feeling. Every year, and beating them at home, it’s amazing.”

“Talk about depth, (Darren) was a nose tackle last year,” head coach Jesse Davis said of Jimenez and the depth of his team. “He put the work in during the offseason, he’s had a phenomenal season for us and came up with a huge play when we needed it the most.”

This one looked like it was going to be a blowout as Wellesley built a 21-0 lead early on. Jakob Parker punched in a one yard touchdown run in the first quarter, Max Poirier easily scored from four yards out and Tyler Yen hauled in a 20 yard TD pass from Vincent Ferrara – which was set up by a great third down grab by Dante Varano – and Eddie Webb added all three extra points.

The Raiders’ defense swarmed Needham QB Ben Chapman constantly on Thursday and the Rockets had to punt for times on their first four possessions, Needham finally got moving with 6:44 left in the half after taking over at the their own 20. A 17-play march ensued that included two different fourth down conversions and ended with quarterback Chapman scoring from a yard out on a QB keeper. Varano added the PAT to make it 21-7 at the half.

The Rockets forced a turnover on downs to open the third quarter, then cut it to 21-14 on an eight yard hookup in the back left corner of the end zone between Chapman and his brother Spence to finish off an impressive nine-play drive that also included a huge third down catch by Spencer Chapman to help set up the score. After forcing a punt, Needham got a punt block from Brandt Bickford that was recovered at the Wellesley 12 yard line. The Raiders’ defense stood tall and ultimately forced a 25 yard field goal from Varano to cut it to 21-17 heading to the fourth.

“We struggled this year with closing teams out,” said Davis. “We continued to do it today, but our guys responded, settled down and started playing our football game.”

“Just keep fighting,” Jimenez added when asked what the message was on the sideline as Needham made its comeback attempt. “Don’t let all their plays affect us, just keep rolling.”

Wellesley answered with a 30 yard field goal from Webb after a 10-play drive to push the lead back up to seven. Each team traded punts until Jimenez interception. The pick came just one play after Chapman hit his brother for a massive fourth down conversion. The Rockets forced the turnover on downs to get the ball back near its own 15 in the final seconds before Wellesley locked up another victory in this storied rivalry.

“Any time you get a chance to play Needham and get a win, it’s a big deal for us,” added Davis. “Those are tough kids over there and we were able to make one more play than them today.”