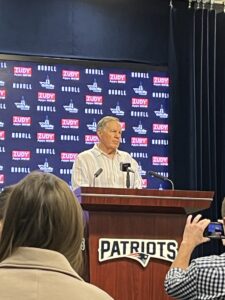 It’s hard to believe after the memorable experience everyone had on Sunday during the Jets game, but the Patriots play again in just two days.

The last time the Patriots played on Thanksgiving was the memorable “butt fumble” game against the Jets in 2012. Before that, it was against Detroit in both 2002 and again in 2010. Those years, it was almost a lock that New England would be Detroit. Now, the Pats will face a different NFC Central (I know it’s the North, but if you’re old enough to remember the old division set up, it just sounds better) foe when they travel to Minnesota for a prime time game.

While Sunday’s victory over the Jets is one many won’t soon forget, the players and coaches had no choice. The quick turnaround with a huge game against the Bills looming next Thursday night at home (another throwback week as well) means the focus quickly had to turn to the Vikings if New England wants to make that game matter even more. When Bill Belichick held his lone in-person press conference on Tuesday, he emphasized just how important the day was.

“That’s the biggest day of the week for us,” he said. “(Monday) was an introduction. Today’s the majority of what we’re doing, and tomorrow’s situational clean up things and review on Thursday. So, big day today.”

The Vikings’ offense posses all sorts of different threats to this suddenly almost-elite New England defense, something else Belichick touched on as well.

“We’re scrambling away here. Short week. Really good team to get ready for here. Minnesota’s a very well coached team in all three phases,” Belichick added. “They have a lot of explosive players, really good in all three phases of the game. So, it’ll be a big test for us out there. You know offensively they have a great back, great receiver, great quarterback. Added [T.J.] Hockenson, so they’ve got a lot of fire power there on offense, and defensively they’re good at all three levels. Their front’s really good, and they’ve got two really good edge rushers. Big guys inside, two good linebackers, and obviously [Patrick] Peterson and Harrison Smith are two outstanding defensive backs. The punter’s got a big leg back to their field goal kicker, explosive returners, good solid schemes in all areas. Kevin [O’Connell] does great work with the offense. They’ve moved the ball very consistently.”

The Patriots’ offense won’t have an easy time either, especially given the struggles that unit has had scoring touchdowns lately. One way or another, things need to get figured out by the end of the night Tuesday before the team heads out to the midwest early on Wednesday.

“Defensively, Coach [Ed] Donatell’s system’s have been very productive for a long time,” said Belichick. “They give you a lot of tough looks and they’ve got a lot of good players. So, a lot to get ready for here in a couple days, but we’ll push through it and try to have a good day today and close things up tomorrow and head out to Minnesota.”