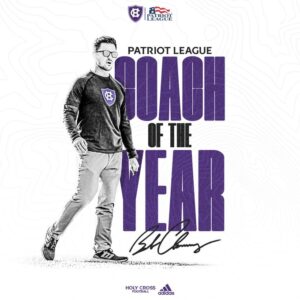 Holy Cross has racked up awards and national recognition all year long, but on Tuesday the list grew exponentially as Bob Chesney and the rest of the program enjoy a well-earned bye week before hosting a second round FCS playoff game at Fitton Field on December 3.

The team earned a ridiculous 18 All-Patriot League selections for the 2022 season while Chesney was named the Dick Biddle Patriot League Coach of the Year. Chesney also won the award in 2019 and 2021. In his time in Worcester, Chesney has gone 36-16, including an 11-0 season this year, the first unbeaten campaign for Holy Cross since 1991.

In what has truly been a memorable year for the program, the long list of awards are just a small bit of recognition for a team that has completely re-written the record book in Worcester. No matter where things finish during this postseason run – whether it’s a national title or a game or two short – what this program has accomplished has not only put Holy Cross on the map, but it’s helped elevate attention for all of college football in New England.