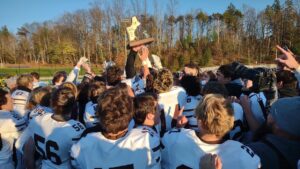 1. Brunswick – In a bizarre game, Brunswick topped previously-undefeated Choate 33-21 to claim the overall NEPSAC championship. The Bruins flew under the radar all season, in part thanks to their league and in part thanks to a lack of high-powered offense. But their defense was tremendous all season, and Elijah Cromartie and company put enough points on the board to carry the Bruins to one of the most dominant NEPSAC seasons in recent memory.

2. Choate Rosemary Hall – Choate was the best team all season, and there’s an argument to be made they still are. Their huge Week 4 and Week 6 wins over Avon and Loomis were highlights of a year marked by the breakout of Pearson Hill, but they ultimately couldn’t handle Brunswick’s defense in the Silipo Bowl championship, charging back from 20 down to take the lead before falling silent again for most of the second half.

3. Loomis Chaffee – Loomis, as expected, had a dominant season, with the 26-15 loss to Choate on Halloween weekend standing as the only blemish. Otherwise, they dominated everyone who came across them, including a good Williston team in the Conroy Bowl Saturday. Dante Reno ran for a score and threw for one to Carlo Crocetti, and David Egbe ran for three touchdowns. Two seasons, two bowl titles for the Pelicans.

4. Williston Northampton – Williston hung tougher than any team—except Choate—against Loomis this season, surging back from two scores down to lead in the early third quarter. But the Wildcats let it slip away. Regardless, a fantastic season for Tommy Beaton and crew, led by the great quarterback play of Drew Renzella and a talented cast of skill players. That’ll probably be the best season in Easthampton for a long time.

5. Exeter – Despite being bowl-ineligible for exceeding their league’s postgraduate limit, 2022 was an important season for Panos Voulgaris and Exeter. The Big Red went 7-1, turning last year’s 2-6 season on its head and gaining serious traction for the program. Going forward, Voulgaris will have a basis on which to recruit; he can go back within the PG limit next year and should have a contending team.

The Spartans capped a weird ISL season by becoming the only ISL team to win its bowl game against a Class B opponent, which goes to show the state of the league as compared to the Connecticut-based prep conferences. Either way, they’ve got something going with Mike Landolfi at quarterback and Jovon Mobely out wide on both sides of the ball. This was a good team in a down year for the league.

Avon finished a season marred by gross underachievement by dominating the ISL’s Governor’s Academy 23-0. On paper, one would’ve thought AOF needed to beat one of the “big three” on their schedule—Choate, Loomis, and Brunswick—to earn a bowl berth. They lost all three but, in a year with eight bowls, they got a berth anyways. They lose a lot heading into 2023, but Jon Wholley’s recruiting track record says that Avon should surround Ryan Puglisi with talent again next year.