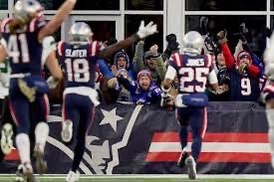 FOXBOROUGH – Sunday’s Jets-Patriots matchup had overtime and possibly a tie written all over it, until Marcus Jones decided it was time to go home.

Locked in a low-scoring stalemate, Jones revealed himself as the hero everyone who was freezing at Gillette Stadium needed, returning a punt 84 yards for a touchdown with just five seconds remaining to give New England a stunning 10-3 win in a game that may have set football back 84 years offensively. The punt return TD was also the first of its kind in the entire NFL this season.

Regardless of how it looked, the victory was huge for the Patriots. New England is now 6-4 overall and 2-1 in the division, creating even more chaos in the suddenly wild AFC East. The Jets dropped to 6-4 and 2-2 in the division.

“My first thing was ball security, so making sure I track the ball and everything because the wind was going crazy out there,” Jones said. “That was the main thing and just staying within the scheme. Without my teammates on that play, that would have been a hard play to make. It’s one of those situations to where I’m happy, definitely for the divisional win. That’s the main thing and now I’m on to the next week. I’m one of those people.

“My main thing is I thought they were going to let him try to kick it out of bounds due to the time on the clock. But the first thing was trying to make sure that I followed my teammates’ blocks. Then I saw the punter and I was like, if I make him miss, then I should be able to go the distance.”

About 10 or 15 years from now when NFL teaching tape is being created for high school and college coaches, this game will absolutely not be on it. New York had just 103 yards of total offense – two, yes, two yards in the second half – and New England had 297 total.

“Well, great team win for us today. The Jets are tough, like they always are. We knew it was going to – expected this kind of a game,” said Bill Belichick. “They’re the best fourth quarter team in football. We knew it was going to be a battle there all the way to the end. Great ending there with the punt return. We came close on a couple of punt rushes, blocked a punt last week, so a combination of rushing and returning is a good weapon to have. Obviously a big day for us defensively, 100 yards total offense. That’s a great job by the staff, the players and all the units that played, running game, passing game, pass rush, coverage, third down. We played well on defense, as did the Jets. We moved the ball. We had 300 yards of offense but only three points.

Four punts – two from each team – opened this game up until New England finally put a drive together after taking over with 7:43 left in the first at its own 20. Three seconds into the second quarter and 14 plays later, the Patriots faced a fourth and one at the Jets’ six. Instead of going for it, Nick Folk was called upon for a 24 yard field goal for the 3-0 lead.

The Jets answered with a 45 yard field goal of their own with 9:38 to play in the half, but only thanks to a Matt Judon neutral zone infraction on third and four that helped extend the drive, Greg Zuerlein originally hit a 40 yarder that was negated by a delay of game before re-kicking.

The Patriots put together an 11-play drive that included an 18 yard pick up by Rhamondre Stevenson on third and 16, but a hold on third and two eventually created third and 12, which eventually resulted in a sack and another field goal attempt from Folk. This one rang off the cross bar from 44 yards out and the teams eventually headed to the locker rooms at 3-3.

The futility continued early in the third quarter.

Judon tied a career high with sack No. 12.5 on the year on the Jets’ opening possession, forcing a punt. A big 30 yard Damien Harris run soon set the Pats up at the Jets’ 37, but a sack and a hold quickly forced third and very long that wasn’t converted. Folk came on to try a 43 yard field goal, but it was wide left.

After two more Jets’ punts sandwiched in-between a New England punt, the Pats ran the ball on third and seven in Jets’ territory late in the quarter. Another run on fourth and three was stuffed in the final seconds, bringing the boo birds and “Zappe! Zappe! Zappe!” chants out as the teams went to the fourth still locked in the ugly 3-3 affair.

Sack No. 13.5 for Judon on third down to open the final frame gave the offense yet another opportunity to basically put the game away with one score. After another punt, the New England defense appeared to get a strip sack from Kyle Dugger and recovery in the end zone by Davon Godchaux one play later. Wilson was ruled down by contact, but the Jets quickly had to punt again.

“It’s my teammates,” said Judon. “The guys that sit here in this room with me. They push me, they challenge me every day. When we go out there, they have so much confidence in me to get the job done. They run a lot of games and a lot of stunts for me to free me up. It’s not me, it’s really not. It could be anybody in this situation, it’s really my teammates.”

The Patriots’ offense was back out with 9:01 left at its own 44 and immediately faced second and 21 after another sack of Jones on first down, ultimately leading to another three-and-out. After one first down, Deatrich Wise Jr. came up with a huge sack on third down to force a punt, setting Jones and the offense up at the New England 34 with 3:22 to play.

On third and one, Stevenson took a two yard loss following an oddly timed second and two quarterback sneak that went no where as the frightening offensive performance continued. The Patriots punted the ball back to New York at the two minute warning.

The Jets took over at the 20 with 1:52 on the clock. Jonathan Jones nearly had a pick six on second down, and on third and 10, it appeared as if Mack Wilson had a sack, but Jones was called for holding to give the Jets an automatic first down. Impressively, that unit dug deep and ended up forcing another punt with 25 seconds left. Setting up Jones’ miraculous return.

The Pats will travel to Minnesota on Wednesday for a primetime, Thanksgiving night matchup on Thursday and they’ll do so winners of three straight after the Monday Night debacle against Chicago thanks to the memorable finish on a windy, frigid day in Foxborough.

“I think you enjoy every win, in the NFL it’s hard to get a win. There’s a lot of good players, a lot of good teams and a lot of good talent. You enjoy it but you have to understand you have to focus,” Judon added. “We have a game in four days and we have to get on these guys. We have to understand what they like to do, understand who they are, understand their go-to plays. And we don’t have a lot of time to do it, and we also have a travel day. That’s difficult, but it’s the NFL. You get paid to do that, so enjoy as much as you want to do tonight, but hopefully we start watching the Vikings and getting on them because that’s a good team.”