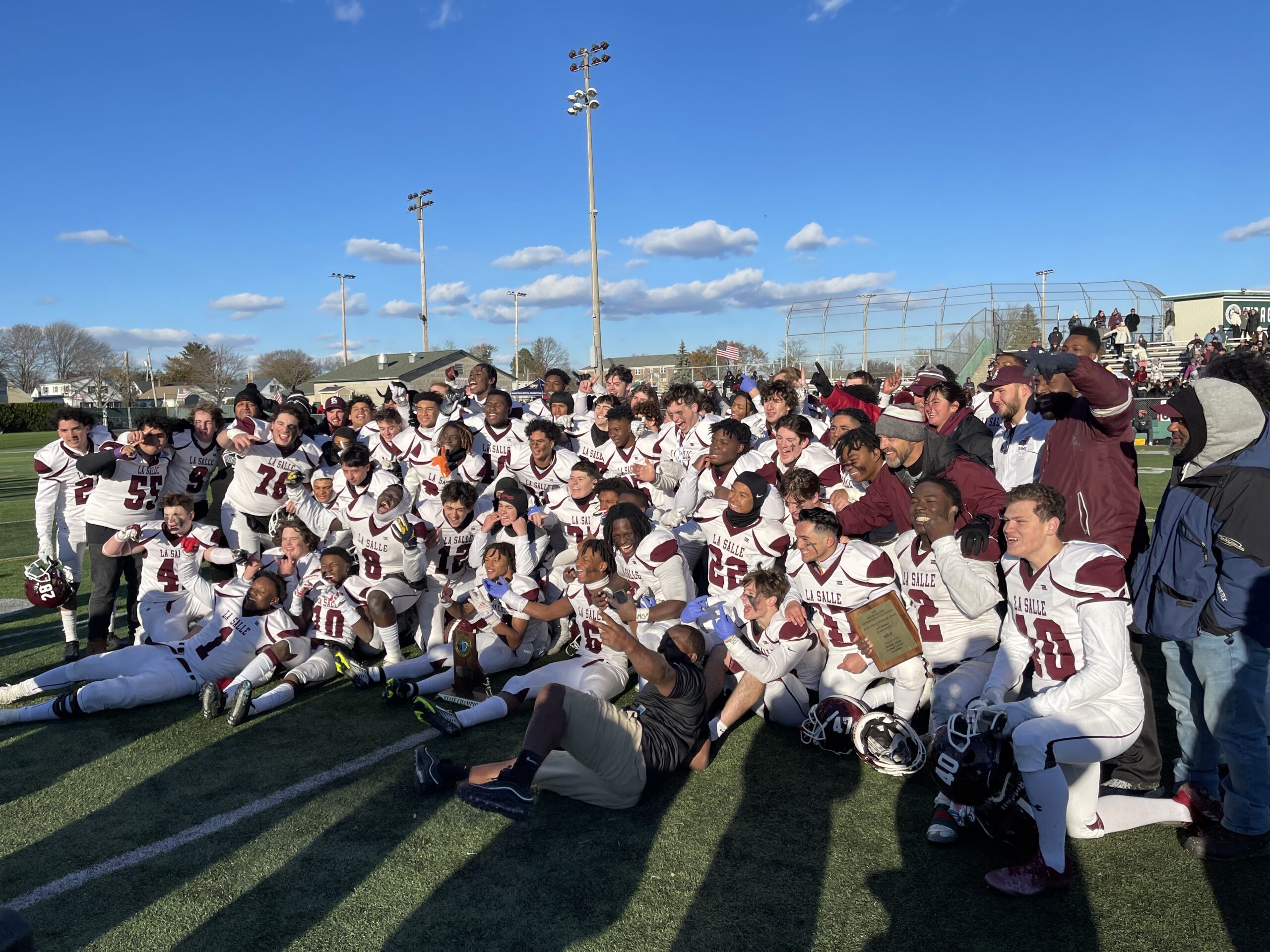 CRANSTON: The LaSalle, Bishop Hendricken championship game is an annual rite of passage in Rhode Island and one of the top sporting events in the state each year. The 2022 edition didn’t disappoint as the Rams topped the Hawks 38-29 to bring home their first state title since 2017.

Expectations were high for the Rams this season as they came in the pre-season favorites. Even though it didn’t look like things were going to go their way early, they locked in. Despite battling adversity and injuries, Geoff Marcone’s squad persevered and ultimately lived up to expectations.

“Lock in was our mantra all season long and the kids answered the call and locked in. It’s a tribute to our players and our coaching staff.”

The Hawks made the first big play of the game when the a mishandled punt resulted in a Hendricken touchdown to put the Hawks up 7-0 early.

Undaunted, the Rams responded on the ensuing possession when all-state running back Jamezell Lassiter burst down the right sideline for a 59 yard touchdown run to even things up at 7-7.

The Rams would pull ahead on a 4th and 20 when senior quarterback Dean Varrecchione hit tight end Brady Fisher on a 23 yard touchdown pass. Hendricken however would respond with a 41 field goal by Matt Brock to make it 12-10 at the half.

The Rams needed to respond and they did exactly that to open the second half. After completing a 37 yard pass to Lassiter that got the Rams in the red zone, Varrecchione would punch it home on a quarterback sneak to give the Rams a 19-10 lead.

On the ensuing possession however, Hendricken proved why they have been the dominate program in the state in recent years when junior running back Oscar Weah took a screen pass 69 yards and set the Hawks up inside the five yard line. Running back Ronjai Francis would punch it home to make it 19-17 LaSalle.

LaSalle however would responded with a 9 play, 62 yard drive that would end in a four yard touchdown run by Varrecchione. The back and forth continued when Hawks junior quarterback Jayden Falcone would respond on their next possession to make it 25-23.

It seemed like history would repeat itself but sophomore running back and game MVP Terrance Campbell would change the narrative by taking the game over. Campbell churned out yards and clock in the fourth quarter and effectively iced the game when he burst up the middle for a 26 yard touchdown run. Campbell didn’t have a single carry in the first half but had 13 in the second half and finished with 133 yards and a touchdown. “The Train” as he told me to call him said he did for the seniors on the team.

Terrance Campbell busts it up the middle to extend the Rams lead to 32-23 with 1:41 left in this one. The Horse took the game over in the second half. @lasalleacadri @RIIL_sports pic.twitter.com/ly9uDN7jCw

“What pushed me was my seniors. They had lost three years in a row. It was big for my seniors so I did it for my team.”

Senior Justin Denson would make it official when he picked off Falcone late and returned it 84 yards for a touchdown. The Rams finally broke through after five years.

“I’m happy for our kids and I’m happy for this program. We dealt with some adversity and some injuries. They never wavered.”

For Varrecchione, the win was one of the greatest moments in his life but overcoming some early adversity also proved just how close this LaSalle team was this year.

“We’re just a family. We’ve been through a lot of adversity this year so that was really nothing to us. I think it showed today. That’s why we won the championship.” Varrecchione continued: “It means everything. I couldn’t have asked for a better finish to my career at LaSalle.”

The Rams still have one more game left when they travel to East Providence on Thanksgiving morning. Bishop Hendricken completed their season and will move onto 2023.