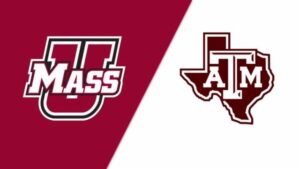 Kickoff: The UMass Minutemen head back down south for the second time in as many weeks to take on an ailing Texas A&M football program that had College Football Playoff dreams at the beginning of the season. The Minutemen lost a heartbreaking 35-33 thriller to Arkansas State (3-7) last week in Jonesboro, while the Aggies were taken down 13-10 by the Auburn Tigers (4-6). Neither team hoped to be in this position at this point in the season, with the Minutemen hoping to have a few more wins by this point, and the Aggies using this game as a tune-up before bowl season. Luckily for UMass, they’re playing with house money in this game, with all the pressure on an Aggies team who simply can’t afford to add another painful defeat to an already lost season.

First Down: A week after it looked like the Minutemen finally found a quarterback for the remainder of the season in sophomore Brady Olson (55/107, 591 YDS, 2 TDS, 6 INTS), his 50% completion rate and two interceptions against Arkansas State found him benched mid-game. Redshirt sophomore Garrett Dzuro (22/35, 311 YDS, 1 TD) stepped back into the fold and went 10-of-14 for 129 yards and a touchdown, leading the Minutemen on a comeback that was a two point conversion away in the dying embers of the game to force overtime. It’s unclear who’ll get the starting nod on Saturday, but given Dzuro’s late heroics to keep UMass in the game he may have earned another full start. The A&M defense has surrendered the seventh fewest passing yards allowed in the FBS this season, allowing just 60 yards through the air against Auburn last week. With an already struggling passing game, it may be difficult to move the ball through the air for the Minutemen,

Second Down: One of the most positive things to come out of last week’s loss was the resurgence of redshirt senior running back Ellis Merriweather (130 CAR, 479 YDS, 3 TDS). For the first time this season Merriweather touched the 100+ yard mark, carrying the ball 29 times for 122 yards and two touchdowns. Considering how he crossed 100 yards in seven of the Minutemen’s 12 games in 2021, it’s certainly disappointing it wasn’t until November that he’d reach that mark in 2022. Regardless, with hopes of a future in the NFL it was huge for his confidence, and he’ll no doubt have a chance to increase that pedigree this weekend against an Aggie defense that’s surrendered the seventh most rushing yard in the FBS. In their last three games, A&M has allowed an average of 317 yards per game on the ground, with Auburn having two separate backs rush for north of 120 yards a piece.

Third Down: The Minutemen surrendered 35 points last week, but save for two explosive plays the score could’ve looked a lot different. A Brady Olson pick-six gave Arkansas State an early advantage, and the defense allowing a one play, 75 yard touchdown run later in the game would be reflective of the self-inflicted wounds that UMass have suffered at times this season. However, former Florida State quarterback James Blackman was fairly limited by a stout UMass secondary who have been the shining star of this defense all season. Ranked 19th in the FBS in passing yards allowed, the Minutemen had their fifth different member register at least one interception this season. The Aggies haven’t gotten much out of their quarterback room like they’ve hoped this year, but will more than likely give true freshman Conor Weigman (50/95, 550 YDS, 5 TDS) another chance to prove himself after his first collegiate start a few weeks ago.

Fourth Down: The UMass total defensive rank sits 51st in the nation. This impressive feat, lying 23 spots higher than Texas A&M at 74th, may be largely attributed to the secondary, but the rushing defense has improved in recent weeks as well. While they surrendered 133 yards on the ground last week at Arkansas State, 75 of those came on one play. Against Buffalo and UConn this season the same pattern occurred, where the Minutemen had a solid day defending the run but surrendered a broken play or two that would inflate their yards against. Aggies lead running back Devon Achane (158 CAR, 887 YDS, 6 TDS) was sidelined last week against  Auburn, and it’s unclear whether or not he’ll be back this weekend. Sophomore Amari Daniels (15 CAR, 94 YDS) started for the first time this season last week and was somewhat effective, though not a game changer.

Extra Point: This is the first ever match-up between these two schools. The only commonality they share are their similar colors and history with the nickname “Aggie,” otherwise, these are two schools who are wildly different from one another. Coming into the season, the buzz around the A&M program was exceptionally high. Ranked in almost every major top 25 chart among the top five teams before the season started, the Aggies were expected to be competing for a College Football Playoff spot come this time in the season. However, a combination of injuries, inconsistency, and poor performances have guaranteed A&M their first losing season since 2009. Head Coach Jimbo Fisher was brought over from Florida State in 2018 to bring the Aggies to the promised land, but instead has yet to earn his lofty multimillion dollar contract.

Final Drive: In some ironic way, there may be a few Texas A&M fans cheering for UMass come Saturday afternoon. While Jimbo Fisher’s buyout as head coach of the Aggies is a staggering $86 million dollars, with few opt-out options to help the school in the event of a dismissal, a loss to UMass may just be the straw that breaks the camel’s back. His start in College Station has been no different, if not a little worse, than his predecessor Kevin Sumlin, and a loss to UMass would be inexcusable considering the money and talented recruited classes they’ve had. Still, it really is any given Saturday, and given how both teams are struggling, it may come down to who has nothing to lose, and that’s the Minutemen.