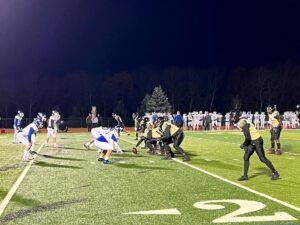 SHREWSBURY – Fourth-seeded Springfield Central left no doubt as to who was the scariest team in Division 1 as they easily handled No. 8 Methuen 54-14 on Friday night, earning another trip to Gillette Stadium to play for the state championship.

“I thought it was a good win, I thought we went out there and executed at a high level,” head coach Bill Watson said after the victory. “I think we are capable of playing better. There are some things I want to get back and fix.”

On a cold and windy night in Shrewsbury, William Watson and the Central offense were on fire all night long. The scoring didn’t get going until late into the first quarter for the Golden Eagles, but when it did it didn’t stop until the final whistle blew.

To get Central on the board first, it took a defensive and special teams’ effort to spark things as Josiah Griffin came up with a big sack that was followed up by a blocked punt that gave Central the football at the Rangers’ 26 yard line. Two plays later, Watson was able to find Kevin Jackson for a nine yard touchdown pass with 2:57 left in the first quarter.

The ensuing defensive drive was a three and out for the Golden Eagles and that gave the offense great field position to strike for the second time on the night. This tim,e it was Watson to Conellius Patrick with 11:15 in the second quarter.

It truly was a full team effort for Springfield as the defense was forcing three and outs at will and the offense was subsequently capitalizing on their chances. Such was the case for the third score of the night when Tariq Thomas punched one in from five yards out with 8:32 left in the first half.

Up until the final seven seconds of the first half it was all Central, but to bring a pulse back to their sideline Drew Eason hit sophomore Shane Eason for the three-yard touchdown pass to bring them within 21 at the half. That positive momentum didn’t last long as Central opened the second half with a 1:12 drive that was capped off by Thomas and his second touchdown of the night, this time from eight yards out.

For the Rangers, although it wasn’t much, the offense did find a pulse again briefly as the Rangers responded when Drew found Shane again but this time it was on fourth and 21 from Central’s 39. Those would be the last points Methuen would score on the night.

Watson got involved in the onslaught on the ground as he was able to extend the lead to 26 with an explosive 15 yard touchdown run at the 5:56 mark of the third quarter and followed that up with another from the same distance with 3:19 remaining in the frame.

The scary thing is, William is right. This team looked like a juggernaut and there were even more opportunities due to penalties and chippy play where the Golden Eagles left points on the field.

“We matched their intensity and raised it,” said Coach Watson. “I just think we have to be smart and not allow people to walk us into silly penalties.”

Pop Watson would add one more rushing touchdown to his stats as he broke off a big 27 yard touchdown run as running time was implemented.

William Watson and his teammates understand what’s now at stake here as far as legacy goes and the Golden Eagles understand how significant this opportunity is for the seniors that will be departing the program.

“It’s going to be an emotional moment,” he added. “But it is probably going to be the greatest moment of my high school career. This is the last time I am putting on this uniform and I am going to make sure it’s a banger.”