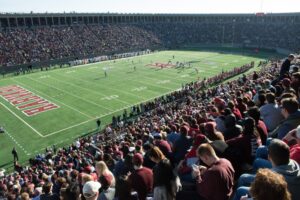 Image courtesy of The Harvard Crimson

The 138th playing of ‘The Game’ takes place Saturday afternoon at historic Harvard Stadium. One of the greatest rivalries in all of sports, Harvard-Yale should be another classic with Ivy League title ramifications in the balance.

Red Sox-Yankees, Bruins-Canadiens, Celtics-Lakers. Locally, ‘The Game’ belongs in the conversation with all of them and even has a case nationally as the greatest sports rivalry in history. Not only for some of the incredible memories on the field, but for its historical significance off of it. Heading into this weekend, Yale leads the all-time series 68-81-8.

The very first game took place a little over 147 years ago on November 13, 1875, a 4-0 victory for Harvard in New Haven, CT. There have been memorable stories to come out of nearly every edition of The Game, but the early day tales are simply wild and some of the names that attended the event highlight the importance of The Game during its infant years .

There was the 1894 game – a 12-4 win for Yale at Hampden Park in Springfield, MA – that resulted in gruesome injuries and fighting in the streets amongst fans that ultimately led to a two-year break in the rivalry. The 1903 game was the first time Harvard hosted Yale at the iconic stadium, losing 16-0. The 1905 game (6-0 win for Yale) capped an unbeaten season for the Bulldogs, but another ugly, injury-filled battle resulted in Henry Lee Higginson – the man who donated what was Soilders’ Field (at Harvard Stadium) at the time – to give a note to Crimson coach Bill Reid that he wanted the team to leave the field, which was quickly ignored.

The 1909 matchup was for the national championship, with Yale claiming the title thanks to an 8-0 win. The Yale Bowl hosted The Game for the first time in 1914. More than 70,000 packed the place – including Theodore Roosevelt and William Taft – but Harvard spoiled the party 36-0. 1932’s matchup was a monsoon at the Yale Bowl, with Babe Ruth, who was rooting for Harvard, braving the elements to watch what was ultimately a 13-0 Bulldogs victory.

The Ivy League’s first year of legitimacy was in 1956. That season, Yale hammered Harvard 42-14 to clinch the first ever league championship. The Game also has a significant place with one of the biggest events in U.S. history. 1963’s game was postponed a week after President Kennedy was assassinated. As a Harvard graduate, Kennedy had planned on attending the game, one that Yale took 20-6.

In 1975, the great local sportscaster Mike Lynch booted a game-winning field goal late in the fourth quarter to give the Crimson a thrilling 10-7 win. Lynch’s kick also locked up Harvard’s first outright league title after being co-champs three other times previously.

Various meetings in the 80’s 90’s, 2000’s and even the 2019 game all have their place in history and memorable moments and story lines worth talking about, but those early days that built the foundation for what The Game is today should be somewhere in your mind whether you’re wearing crimson or blue and white this Saturday.

The historic nature of this game can’t be overstated and with so much on the line for both teams, the ghosts and echoes of everyone who played, coached or attended any of the previous 137 encounters will be swirling inside Harvard Stadium.