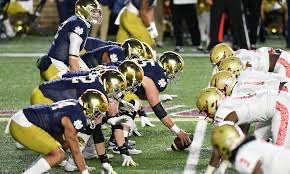 t’s hard to believe, but BC is taking its last road trip of the 2022 season this weekend.

When the Eagles head to South Bend, Indiana to take on Notre Dame Saturday afternoon, it’ll be the final time the Eagle swear the road whites and are able to embrace an “us vs. the world” type mentality for four or five hours.

You always want to play at home, but after stunning N.C. State on the road last weekend, there’s a sense of “let’s go do it again” as preparations got fully underway Tuesday with the first practice of the week inside a colder-than-usual Fish Field House.

“When you play away games, sometimes it’s a little bit more fun,” said Jaiden Woodbey. “You know all the odds are stacked against you, especially last week. We were, what, 9% chance to win? Three touchdown underdogs, we were down 14-0 in the first quarter. It was all going according to plan (for N.C. State) but we never had a doubt we were going to win that game actually.

“Just for us to actually do it, we were just so elated and overjoyed.”

For tight end George Takacs, this weekend carries a little bit of extra significance as well, which makes that road warrior mentality even more important.

“I’m excited for a lot of reasons. I played there for four years and have great relationships with a lot of guys on the team still,” said Takacs. “I’m excited to go back and I’m excited to compete against them. It’s also a big game. We have another ranked matchup this week on the road, excited to get after it.”

The BC defense was unquestionably the biggest reason why the Eagles were able to pull off the upset down in Raleigh, NC a week ago. That’ll have to be the case this weekend too if BC is going to be able to find a way to silence the rowdy crowd in South Bend and guys can’t wait to try and make it happen.

“As much as you love heroes, everybody likes to see a villain,” Jones said when asked about playing the role of spoiler down the stretch. “I feel like we could be overlooked by a lot of teams. You are what your record says it is, but at the same time you’ve got to go out there and play the game.

“There’s nothing more exciting for me than to be in a sold out arena and be able to hear a pin drop. I feel like for this game coming up too, there’s a lot more behind it as well. It’s just another game, but at the same time, you know in the back of your mind it’s another big one.”