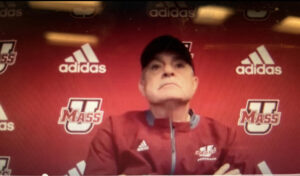 That’s all that kept UMass from forcing overtime against Arkansas State on Saturday, but in the end, a loss is still another loss. The Now 1-9 Minutemen have a daunting task this weekend as they travel to face Texas A&M before closing out the regular season against Army.

The Minutemen put up the most points they have all season and almost 500 yards of offense, but it still wasn’t enough. On Monday, head coach Don Brown talked about the loss and having to turn the page quickly.

“The thing I’m most pleased with is we’re starting to get even effort,” said Brown. “That’s really I think – for the second week in a row – from minute one to minute 60 that we were in the foxhole together, we were competing as a group, offense defense and kicking and we made a bunch of plays. That’s the best performance we’ve had offensively.”

One of the biggest things that took place Saturday was the continued emergence of Brady Olson, who showed he could lead the offense and produce points until he was injured and replaced by redshirt sophomore Garrett Dzuro. Dzuro eventually led the touchdown drive that brought UMass within two in the final moments, but it’s clear Olson should be the guy moving forward.

“Unfortunately, Brady got nicked up there and we had to make a change due to injury,” Brown said. “In reality, I was pretty pleased with the (team) effort. Coming together, staying together, competing and we gave ourselves a chance to get a win in that game.”

When asked on Monday if Olson would still be the guy moving forward, the picture was a bit unclear.

“That remains to be seen, those head things can be tricky, we’ll just have to wait and see,” said Brown.

When it comes to facing the Aggies in what should be a ridiculously hostile environment, don’t count UMass out just yet. Texas A&M is in shambles by their standards, having lost six straight games. The Aggies also have a huge matchup against LSU to close the season, which makes this the definition of a trap game.

Brown talked about his team walking into that kind of atmosphere for the first time as a young group. Sure, they’ve been on the road this season, but haven’t seen anything like what they’ll see on Saturday.

“Our kids have played in some pretty sophisticated environments in terms of crowd, noise and so forth,” added Brown. “I think we’ll be just fine. Obviously, maybe one day this week we’ll do a little crowd noise just to kind of jazz it up a little bit. We play through loud music virtually every practice for a portion of it, so it’s all good.”