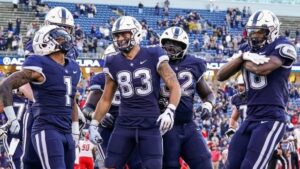 HARTFORD – This wasn’t supposed to happen this year.

This wasn’t even supposed to happen for the next two or three years.

On Senior Day, UConn welcomed a Top-20 Liberty team to “The Rent” for the final home game of the 2022 season. With a sixth win and bowl eligibility on the line for head coach Jim Mora and his Huskies, UConn shocked the college football world with a 36-33 win.

After years of futility, the Huskies are now 6-5 and have one regular season game left on the road against Army next weekend before they can start making preparations for one more road trip.

“That was a battle. That was a really fun game to be apart of,” Mora said after the game. “I think that was about as complete of a team win, a team effort as we have had all year.”

The Huskies offense opened the game with a methodical first drive that saw RB Victor Rosa punch in a touchdown from 16 yards out to take an early 7-0 lead. However, you can’t tell the story of the first quarter without talking about the Huskies stout defense. The defense continued to impress as they were able to strip sack Liberty quarterback Johnathan Bennett for a scoop and score by linebacker Jackson Mitchell with 1:47 left in the first. The defense then followed that up with an interception to close out the quarter on the very next drive to end the first quarter with a 14-3 lead.

The second quarter felt like much more of what we all expected the game to look like, with Liberty finding traction and capitalizing on some UConn mistakes. In the first minute of the second, Husky QB Zion Turner tossed a late option pitch to back up QB Cale Millen on a third and three that resulted in a fumble, giving the Flames possession at Huskies’ 49. The Flames were able to make the most of the opportunity as they marched down the field and capped off the drive with a touchdown pass in the back of the end zone to CJ Yarbrough from three yards out with 13:00 left in the second quarter to make it 14-10.

The Huskies offense went stagnant for a little while and the defense seemed to be running on fumes for much of the second quarter. That unit desperately needed the offense to help them with a sustained drive to catch a breather. They got it. Robert Burns took a handoff from the Huskies’s six and rumbled his way to the Flames’ 36 to kick off an important answer drive. Burns would cash in a few plays later as he punched it in from a yard out to extend the UConn lead to 21-10 with 5:16 left in the half.

The Huskies offense certainly had its fair share of struggles in the first half as another turnover at midfield allowed for Liberty to close the gap going into the half. This time it was by way of a questionable double coverage throw by Turner that resulted in an interception. The Flames were able to springboard off the mistake and punch in a touchdown run from the one line as Malik Caper scored with :35 left in the half to close out the quarter at 21-17.

Liberty opened the second half with the ball and was able to march down the field with ease. The Flames capped off the opening drive with a one yard touchdown run by running back TJ Green with 12:33 left in the third quarter to take its first lead of the game. After giving up the opening drive touchdown, the Huskies offense was unable to mount anything of its own and went three and out, giving the ball back to Liberty with a chance to extend the lead. The Flames were able to do so with a field goal and took a 27-21 lead.

The Huskies faced a third and six to open the fourth quarter and hit it big with a 29 yard touchdown run by Victor Rosa on the first play to take a 28-27 lead. The lead would be short lived, however. On the very next play, the Flames got a 75 yard run by Demario Douglas to reclaim the lead 33-28 after a failed two-point conversion with 14:39 to go.

Following some back and forth stale offense, the Huskies defense found a way to stand tall on third and one followed by a fourth and one at midfield, forcing the Flames to turn the ball over at the Liberty 41 down five with 8:40 left in the game.

Needing to answer the bell on a fourth down of its own, Turner hit Kevens Clercius for a go-ahead touchdown from 32 yards out. The Huskies went for two and successfully extend the lead to three with 5:43 remaining.

“When they called it I already knew what my plan was,” Turner said about the touchdown throw to Clercius. “Once I saw KC win (his matchup) I just knew I had to put the ball there and watched him make a play.”

The Flames eventually got the ball back with 2:42 left and time to tie or take the lead. Facing a fourth and two with 1:20 left, Liberty was able to extend the drive and keep hope alive. With 54 seconds left, the Flames faced a third and 13 from their own 49 yard line and threw an incompletion, setting up a fourth down standoff that fell incomplete.

Everyone in the building knew what this win meant to the program and the fans in attendance took full of advantage of the moment as they stormed the field to celebrate with their team.

“The fans, this is just everything we wanted to bring this program back to,” Turner said.. “To see them rush the field like that, I know it means a lot to them, and taking pictures with the fans, that was a great feeling.”

For the first time since 2015, UConn is bowl-bound. It’s a fairly tale for most Huskies’ fans and alumni given just how bad this program has been the past few seasons. Mora is now probably a lock for National Coach of the Year and the Revolution has not only started, it’s taken over the state of Connecticut.

“I knew it would be a challenge, but when I first met the players, it became very apparent very quickly that they were different type of young people.” Mora said about his squad. “They don’t have that sense of entitlement; they want to work for everything. They commit and go after it.”