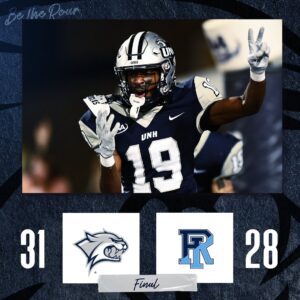 DURHAM –  The backdrop of a warmer than usual Wildcat Stadium was the setting for a thrilling 31-28 win for UNH.

With 17 seconds to play in the fourth quarter trailing by four, Wildcat sophomore quarterback Max Brosmer (31/43, 316 YDS, 2 TDS) delivered a 26 yard dime to freshman DJ Linkins (1 REC, 26 YDS, 1 TD) to ice the Rams and take control of their playoff destiny. Brosmer, who recorded his first 300+ yard game, was outstanding all afternoon. He was incredibly confident in his team’s ability to go out and make big plays when it mattered most.

“Ultimately DJ (Linkins) ran a really good route and made a spectacular catch in the endzone, all I had to do was throw it,” said Brosmer. “A lot of this stuff just came down to the guys going out there and making plays.”

New Hampshire (7-3, 6-1) now has a CAA title and an FCS playoff berth well within its grasp while Rhode Island (6-4, 4-3) is most likely going to be on the outside looking in no matter how they finish the regular season.

“We got better as the game went on, and I think that showed a lot of conviction and mental toughness that these guys have,” said UNH head coach Ricky Santos. “Ultimately, sitting here in the head chair that’s what you want, you want every single weekend to get a little bit better.”

While the focus will ultimately be on the Wildcats win, the Rams – especially in the first half, – were the more consistent team.

Redshirt senior quarterback Kasim Hill (17/33, 222 YDS, 2 TDS; 13 CAR, 43 YDS, 1 TD) had a solid afternoon, with him and redshirt senior receiver Ed Lee (9 REC, 116 YDS, 1 TD) continuing their dynamic duo partnership. Rams head coach Jim Fleming was unhappy with the result, but not about the way that his team handled themselves in the close loss.

“I thought we managed the game as good as we possibly could,” said Fleming. “It’s a tough one though, coming up here walking away with a kick in the teeth.”

A major plus for the Rhody defense was their front seven, limiting Wildcats star running back Dylan Laube to just 57 yards on the ground.

“We kept Laube off the mark which was a major focus on our part coming into this week,” added Fleming.

In the end, it was the Wildcats’ resolve to hold on and come back that shined through, leading just once the entire game before the final score. UNH sophomore cornerback Noah Stansbury (4 tackles, 1 sack) stressed how each side of the ball showed resolve and supported one another in the win.

The first quarter was relatively quiet as each offense struggled for consistency. Both Brosmer and Kasim Hill were off the mark on several throws, and neither running back could seem to find their footing.

In the dying embers of the first quarter a failed fourth down attempt for the Wildcats set up the Rams with great field position. Rhody would make quick work with a short field to set up a Hill five yard touchdown run to take a 7-0 lead.

Each offense would trade stalled drives before the Wildcats finally found the scoreboard on a 30 yard Nick Mazzie field goal to cut the Rams’ lead to 7-3. The Wildcats continued to do themselves no favors with a poor kickoff that deflected directly off a Rhody player, setting up yet another short field for the Rams.

In just five plays, URI would march down and extend their lead on a redshirt senior Marques DeShields (19 CAR, 77 YDS, 1 TD) 19 yard rush, taking a 14-3 late in the second quarter.

UNH answered with as good a two minute offense as you’ll see in college football. In 10 plays, the Wildcats drove 79 yards just before the quarter’s end, with Brosmer finding redshirt freshman Caleb Burke (2 REC, 5 YDS, 1 TD) on a four yard touchdown pass to cut the Rams lead to 14-10.

To open up the second half, the Wildcats would put another three points on the board with a Nick Mazzie 40 yard field goal, cutting the Rhody lead to 14-13. The Rams responded right away with an imposing 12 play, 75 yard drive that took 5:46 of clock, resulting in a five yard touchdown pass from Hill to graduate student Kahtero Summers (4 REC, 68 YDS, 1 TD) to extend their lead to 21-13.

The Wildcats – clearly unphased by the Rams – would go down and score right away on a four yard Dylan Laube (14 CAR, 57 YDS, 1 TD; 5 REC, 33 YDS) run, and see Brosmer scamper in for the two point conversion to tie the game at 21-21 in the closing moments of the third quarter.

The UNH defense would make their biggest play of the game on the ensuing Rams drive. On a third and 15 from their own 45, Kasim Hill was stripped by sophomore Dylan Ruiz (5 tackles, 1 sack) and see the Wildcats recover to set up UNH deep in Rhody territory.

UNH brought the ball inside the URI five yard line, but were only able to come away with three points, though they’d claim their first lead of the game up 24-21.

The Wildcats only getting three would come back to haunt them on the next Rams drive, as Hill took Rhody 68 yards down the field and found Lee for a 15 yard touchdown pass, giving URI the 28-24 lead.  A UNH turnover on downs certainly had Wildcat fans worried, but the defense responded with a huge stop, giving Brosmer and co. the ball back with 2:21 to play in the quarter.

With shades of their first half two minute offense, the Wildcats drove 89 yards in nine plays to set up the game-winning play.

The Rams moved the ball to the Wildcat half of the field with just one second to go in the game, but Hill’s Hail Mary attempt was batted out of the end zone, securing the win and setting off a wild celebration.

The Rams will take on the Albany Great Danes (3-7) to close out the season next week. The Wildcats travel to Orono to take on the Maine Black Bears (2-8) in a battle for the Brice-Cowell Musket. A win over their longtime border rivals could mean clinching a share of the CAA conference title, as well as guaranteeing them a shot at a chance for a spot in the FCS playoffs.