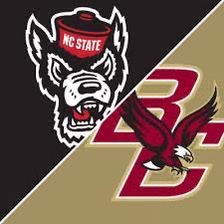 Kickoff: As this disappointing season winds down, the Eagles are back on the road this weekend looking to upset No. 16/17 N.C. State. The Wolfpack is looking for a program record 17th straight home win, making BC’s job even more difficult than it already was.

First down: At this point, these games are more about 2023 for BC than the actual win or loss. Today’s another big day for Emmett Morehead. After making his first start last week and looking impressive in a loss to Duke, can Morehead make it two straight weeks where he looks like the next Eagles’ quarterback moving forward. There’s a ton of uncertainty with Phil Jurkovec in terms of next year and if Morehead can put together a few more strong showings on the road against N.C. State and Notre Dame next week, the conversation gets awfully interesting.

Second down: This could also be a revenge game of sorts for Zay Flowers. Earlier in the week, N.C. State head coach Dave Doeren talked about recruiting Flowers out of high school to play both offense and defense. Defense? This man is clearly the most talented wide receiver in the ACC and maybe the country, so you’ve got to wonder if Flowers will have that in the back of his mind when he takes the field this week.

Third down: That 17-game win streak thing could also be a motivating factor. What better way to create a special memory for the seniors on this team than going into a hostile environment and ruining the streak and the Wolfpack’s Senior Day?

Fourth down: The continued progress of the young players – aside from Morehead – is the biggest thing these last few games too. This is a fantastic opportunity for guys like Alex Broome, Joe Griffin and the young offensive line to continue getting valuable reps in a hostile atmosphere that simply can’t be replicated with noise inside Fish Field House. Look for Broome and Griffin to both have big days, win or lose.

Extra point: The creativity of play calling on both sides is something to watch for too. Earlier in the week, Jeff Hafley talked about BC now being in a spot where the staff can maybe call some things they might not have called yet this year due to certain circumstances. At this point, it’s kind of “throw everything against the wall and see what sticks” type of spot for the Eagles, it’ll be interesting to see what he, John McNulty and Tem Lukabu dial up.

Final drive: Again, if you’re an Eagles fan, the easiest, least-stressful way to watch this game is to not worry about results. Instead, you need to be looking for improvement up front, making sure Morehead doesn’t take a step back and most importantly that the effort is still there. As long as BC stays competitive like it did against Duke, you can take some solace in the fact that these experiences are helping for next season, even if it means taking lumps now.