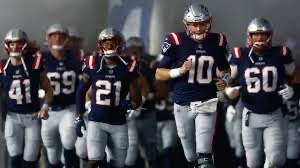 With no game to break down this weekend, we thought it might be fun to put a little twist on the “midseason awards” that always float around this time of year.

As the Pats hit the bye week at 5-4, who is the team MVP on offense and defense? What about special teams? Who’s the Rookie of the Year and Coach of the Year at 1 Patriot Place? Well, let’s try to answer those questions…

This one is pretty easy. Judon has easily been the best player on the defensive side of the ball with 11.5 sacks and aside from Micah Parsons, he’s probably the best defensive player in the league right now. Judon’s energy is also infectious whether you’re on the team or just a member of the media down there three or four days a week, it’s impossible not to crack a smile when Judon speaks. As long as he can keep this pace up and not fade down the stretch like he did a year ago, there’s a serious case to be made for him being the DPOY in the NFL, but he’s most certainly the Pats’ MVP right now.

Stevenson is really the only consistent piece of the offense to this point. The second-year back has 618 yards on 129 carries and four rushing touchdowns. Stevenson also has 24 catches for 170 yards and a touchdown. The numbers don’t leap off the page obviously, but who do you trust more to have a productive, non-negative play at this point? Maybe Jakobi Meyers, but Mac has to get him the ball for that to happen and that’s a struggle right now. If the Pats don’t have Stevenson through these first nine games, they might be well below .500 at the bye.

Mr. Automatic has been a revelation since joining the Patriots. The journeyman kicker has found a home here of the last couple seasons and this year alone has pretty much stolen a few wins for the Patriots. Folk has accounted for 77 points by himself this season. Folk has made 90% of his field goals and 100% of his extra points. Games against the Jets and maybe even the Colts game aren’t victories without Folk’s consistency shinning through. You could legitimately make the argument he’s the Team MVP right now if Judon wasn’t having such a monstrous season.

ROOKIE OF THE YEAR – JACK JONES

He might end up being one of Bill Belichick’s best draft picks ever. It’s a bit early for that of course, but his ball hawking skills and speed stand out immediately when he’s on the field. Jones has 17 solo tackles, two interceptions and a forced fumble to go along with five passes defended. The pick-six against the Packers in Lambeau is his career highlight so far, but it feels like there’s plenty more on the way. Perhaps most importantly, it’s been a while since the defense had a player in the secondary with as much swagger and confidence as Jones has. Ideally, that rubs off on other guys and this defense shows it can be elite in the second half of the season.

COACH OF THE YEAR – JEROD MAYO

I know, I know, you all thought it would be Patricia or Judge, right? Ok, but seriously, after so many questions surrounded this defense following the post-bye week collapse last season, this unit has quietly gone about its business and been excellent aside from the Bears Monday Night Football debacle. The defense has given up 20, 14, 37 (Baltimore), 27 (Packers), 0, 15, 33 (Bears), 17 and three points so far this year. That’s pretty damn good in the NFL and let’s be honest, the Ravens offense is tough for anybody. Steve Belichick probably deserves more credit here too, but I think we all understand this is primarily Mayo’s defense since he’s the one on the verge of a head coaching job in the league within the next year or two. All the attention is on the offense, but the defense deserves more credit than its getting.