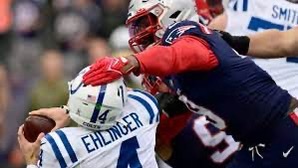 FOXBOROUGH – Who needs offense when you’ve got a defense like the one New England displayed on Sunday?

The Patriots tied a franchise record with nine sacks, had a pick-six and a blocked punt. All that led to a smothering 26-3 win over the Colts, putting the Pats one game over .500 heading into the bye week. New England’s offense struggled quite a bit, but the defensive performance overshadowed most of the ugliness.

“Good win for our team,” said head coach Bill Belichick. “Certainly, a lot better than last time we played the Colts. Had a lot of big plays defensively. Obviously, the third down and field position they created for us, big play in the kicking game, and, you know, were able to convert enough of those, score enough points to win.

“And so that’s what it’s about in this league. So always things we can do better but really good to walk off the field today with a good win against the Colts, a team that we obviously couldn’t play very well against last year. So it was a little different story today.”

The only positive thing the Patriots could take from a putrid first quarter of football for both teams that ended scoreless was three sacks – two from Matthew Judon and one from Ja’Whaun Bentley – and a 24 yard screen to Jonnu Smith late. Indianapolis and New England combined for just nine yards before the Smith screen and six total punts.

The Smith screen came on the third possession late and New England was on the Colts’ 38 to open the second. Four plays later, the Pats had to settle for a 49 yard field goal attempt from Nick Folk that he drilled for the game’s first points.

After forcing a fourth punt in four Colts possessions, the Pats got great field position at the Indianapolis 43 thanks to an impressive Marcus Jones return. The offense struggled to get anything going though, and once again Folk was called upon, this time for a 43 yard field goal to make it 6-0 with 8:50 left in the second.

New England’s D quickly forced another punt, but instead of making the offense do any heavy lifting, Jonathan Jones flew in around the edge to block the punt and Brendan Schooler recovered at the Colts’ three. Two plays later, Jones hit Stevenson for a short TD to put the Patriots up 13-0.

The Colts were forced to punt for a sixth time in the first 30 minutes when Josh Uche sacked Ehlinger on third down – the fourth of the half for the Pats’ defense – setting up Jones and the offense at its own 24 with 3:18 to play in the half, but the offense sputtered and had to punt again. Indianapolis finally got something going with a nine play drive in the waining moments of the second, but a 39 yard missed field goal following another Uche sack on third down sent the teams to the locker room with New England still leading by 13.

“Defense is always fun,” Uche said when asked if a day where everyone is getting involved makes it that much more fun. “This is the best job in the world. Kind of like one of my OG’s told me – Jamie Collins – you’ve got to go out there and have fun and make it look easy. That’s the ultimate goal. We work hard in practice and it just comes down to executing and having fun.”

The second half started the exact same way as the majority of the first half went, with Uche recording his third sack – the team’s sixth – and the Colts punting the ball away. Indy got it right back two plays later though when Jakobi Meyers was stripped after gaining nine on a screen play. The Colts took over at the Patriots’ 40 and thanks to another Judon sack on third down at the New England 13 yard line – his third and the team’s seventh – had to settle for a 40 yard field goal, cutting it to 13-3.

The Pats’ offense answered with a nine play drive, but once again fizzled out in Colts territory. Another Folk field goal – this time from 43 yards out – pushed the lead back up to 16-3 with a little over four minutes to play in the quarter.

Hanging onto that same 13-point lead, the Patriots defense forced Indy into a fourth and one situation at the Colts’ 45 to open the final frame. An odd play call (toss right) was completely blown up by Judon and Bentley, forcing a turnover on downs.

“My teammates go out there and put me in great situations to execute,” said Judon, who may now be a front runner for defensive MVP. “My coaches call good calls and I’m just willing to do whatever I need to do for our defense to have success. Whatever that is, however it looks and however I need to play, I’m willing to do it. Today, it was just one of those games.”

Jones found a wide open Hunter Henry for 30 yards on third down during the ensuing drive, but yet again, the offense couldn’t score, even with a first and goal from the five. Folk hit a chip shot 28 yard field goal to salvage three and make it 19-3.

“He’s the man,” Jones said with a big grin when asked how nice it is to have someone like Folk when the offense is struggling to score.

Jahlani Tavai and Deatrich Wise combined to get sack No. 8 on the day for New England and the defense forced another punt on the ensuing Colts drive. New England responded with a punt of its own and pinned the Colts at the 11 with a little over five minutes remaining. Raekwon McMillan registered the team’s ninth and final sack of the game two plays into the drive and a Jonathan Jones 16 yard pick six put the icing on the cake with 3:59 left.

With the Bills losing to the Jets on Sunday, New England goes into the bye week with a whole new outlook on things. The AFC East is wide open and anything can happen over the next two months if the defense plays the way it did on Sunday.