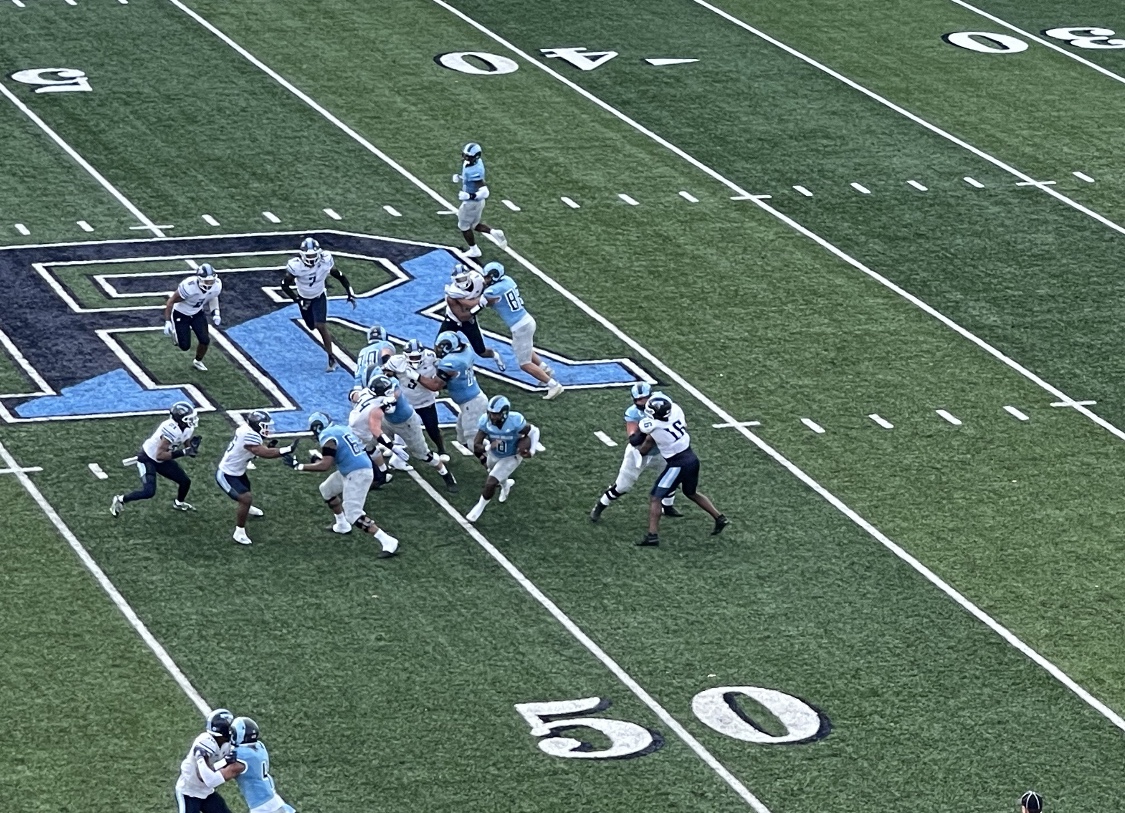 KINGSTON, R.I- It has been 14 years since Rhode Island beat Maine in a football game but that streak is a thing of the past as the No. 23 Rams pulled away late to earn a hard fought 26-22 win.

Early on, it appeared like Maine’s mastery over the Rams was going to continue. The Black Bears scored first when kicker Cody Williams connected on a 29 yard field goal in the first quarter. Maine would carry that lead into the second quarter and add to it when running back Elijah Barnwell (20 carries, 98 yards, 1TD) capped off a 15 play, 91 yard drive by punching it home from two yards out.

The Black Bears seemed to be in control but this Rhode Island team is different. They are never out of a game because of their big play ability. Wide receiver Ed Lee would make the biggest play of the day when he caught a 63 yard touchdown pass from Kasim Hill (13-25, 244, 1 TD). The former walk on wide receiver caught 6 passes for a career high 190 yards and a touchdown.

Lee and Hill have known each other since high school. When asked what makes their connection so special, Hill says it is their relationship and their work ethic.

“We’ve known each other for a long time. We went to high school together. I think just having that chemistry and to speak on Ed, he just works his tail off. He’s earned everything that’s coming to him now. I’m happy to see him shining.”

Maine was able to tack on another field goal right before the half and took a 13-7 lead into the break.

The Rams resiliency however has been a trademark this season and they responded to open the second half with a 10 play, 66 yard drive that was capped by a 7 yard touchdown run by Hill.

Like they did all afternoon, Maine responded with a drive of their own that was capped off by a Joe Fagnano (12-27, 126 yds, 1 TD) 18 yard touchdown pass to wide receiver Rohan Jones.

The Rams came right back on the next possession and took the lead again, this time on Hill’s second rushing touchdown of the game from 9 yards out. URI led 20-19 going into the fourth.

Maine would take the lead to start the quarter on Williams third field goal of the day, this time from 39 yards out. The Rams however had one more drive in them and they turned to their workhorse this season, running back Marques DeShields to pull ahead. DeShields had a quiet first half but was a major factor in the second half finishing with 110 yards and a touchdown on 23 carries. DeShields would score the eventual game winner with 7:17 left.

The Rams buckled down defensively and held on to beat Maine for the first time 2007. When asked about his team’s resiliency, Head Coach Jim Fleming said it’s all about belief.

“It’s all about belief and no panic. We have done it before and we can do it again. That was a monumental step for us in this game just because of the history of the Maine, URI rivalry. Fleming continued. “This game should have no bearing on next week but it’s been a long time since we beat them (UNH) up there.”

The Rams will visit the Wildcats next Saturday at 1 pm for a game with major CAA and playoff implications.