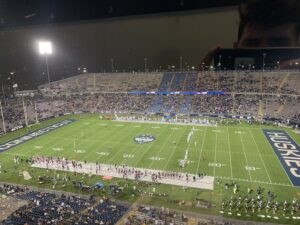 EAST HARTFORD – An unseasonably warm night at Pratt & Whitney Stadium was the setting for the UConn Huskies’ 27-10 win over the UMass Minutemen. Dubbed among other things, the “U Game,” this year’s edition did not disappoint, as these two New England rivals defied their critics and played a tough game all the way till the end.

The Huskies (5-5) rushed for 274 yards and were led by freshman Victor Rosa (17 CAR, 87 YDS, 2 TDS) who impressed between the trenches all evening long.

Rosa combined with sophomore Devontae Houston (7 CAR, 84 YDS, 1 TD) and graduate Robert Burns (10 CAR, 59 YDS) to grind the Minutemen down for their most yards surrendered this season.

The Minutemen secondary limited UConn freshman quarterback Zion Turner to just 60 yards on six of 13 passes, sacking him twice and forcing him to have a relatively quiet night. For UMass (1-8), sophomore Brady Olson (19/34, 266 YDS, 1 TD, 1 INT) played the best game of any MInutemen quarterback this season.

Redshirt senior wide receiver Cameron Sullivan-Brown (5 REC, 124 YDS, 1 TD), who had a career high night, though this was more business as usual from the sophomore quarterback.

The Minutemen have struggled for consistency at quarterback all season, but with Olson’s performance, he may have locked up the job the rest of the year.

The game began with a pre-snap false start on the Minutemen, but picked up the rest of the drive. Opening up the playbook a bit Olson looked sharp, bringing the ball down to the UConn redzone.

An underthrown backwards pass to redshirt senior Ellis Merriweather (12 CAR, 43 YDS) was fumbled and recovered by the Huskies, who took it down to the Minutemen redzone. Despite the good field position, the Huskies couldn’t capitalize, as sophomore Noe Ruelas missed a 32 yard field goal.

The Minutemen would pick up right where they left off with an eight play, 75 yard drive that ended in a redshirt sophomore Cameron Carson 23 yard field goal.

The UMass lead would be short lived though, as UConn’s first play from scrimmage was a 75 yard touchdown run from Devontae Houston to give them a 7-3 advantage. UMass would move the ball well again, but see Cameron Carson’s 52 yard field goal attempt fall short, where an impressive return from the Huskies brought the ball to midfield.

The Huskies began the second quarter with a 14 play, 52 yard drive that ended in a Noe Ruelas 23 yard field goal to extend their lead to 10-3.

The Minutemen got the ball back and Brady Olson delivered arguably the best throw of the season thus far, finding Sullivan-Brown for a 53 yard strike to even the score back up at 10-10.

After each team traded a punt on the next two drives, the Huskies would take a 13-10 lead on a 26 yard Noe Ruelas field goal to go into halftime ahead.

The third quarter started with a series of punts from each team, with neither side moving the ball particularly well. A mistimed snap for the Minutemen sank them deep in their own territory, giving way to a short punt that gave the Huskies the ball on the UMass half.

Victor Rosa would punch in a five yard run to extend the UConn lead to 20-10. The UMass offense responded with a drive deep in UConn territory, but a 27 yard miss from Cameron Carson would keep the score 20-10 as the third quarter came to a close.

While some in the twittersphere lamented Don Brown’s decision to kick the field goal, the UMass Head Coach stood by his decision.

The Minutemen would get a stop on the ensuing drive, but see their offense go three and out and give the ball right back to the Huskies.

UConn would put the nail in the coffin with a nine play, 74 yard drive that saw Victor Rosa score his second of the night and give the Huskies the 17-point lead.

For the Minutemen, they may have finally found a quarterback who can give them some consistency under center for the rest of the season. Though, from certain elements of offensive play calling, and a run defense that has yet to improve, there is still a ways to go to righting this FBS ship.

Meanwhile, the bigger story is UConn. With two games remaining in the season, the Huskies have Liberty and Army standing in the way of a bowl bid. If UConn can lock down one of those games, they’ll be bowl eligible in Mora’s first season and probably lock up a national Coach of the Year award for him as well.