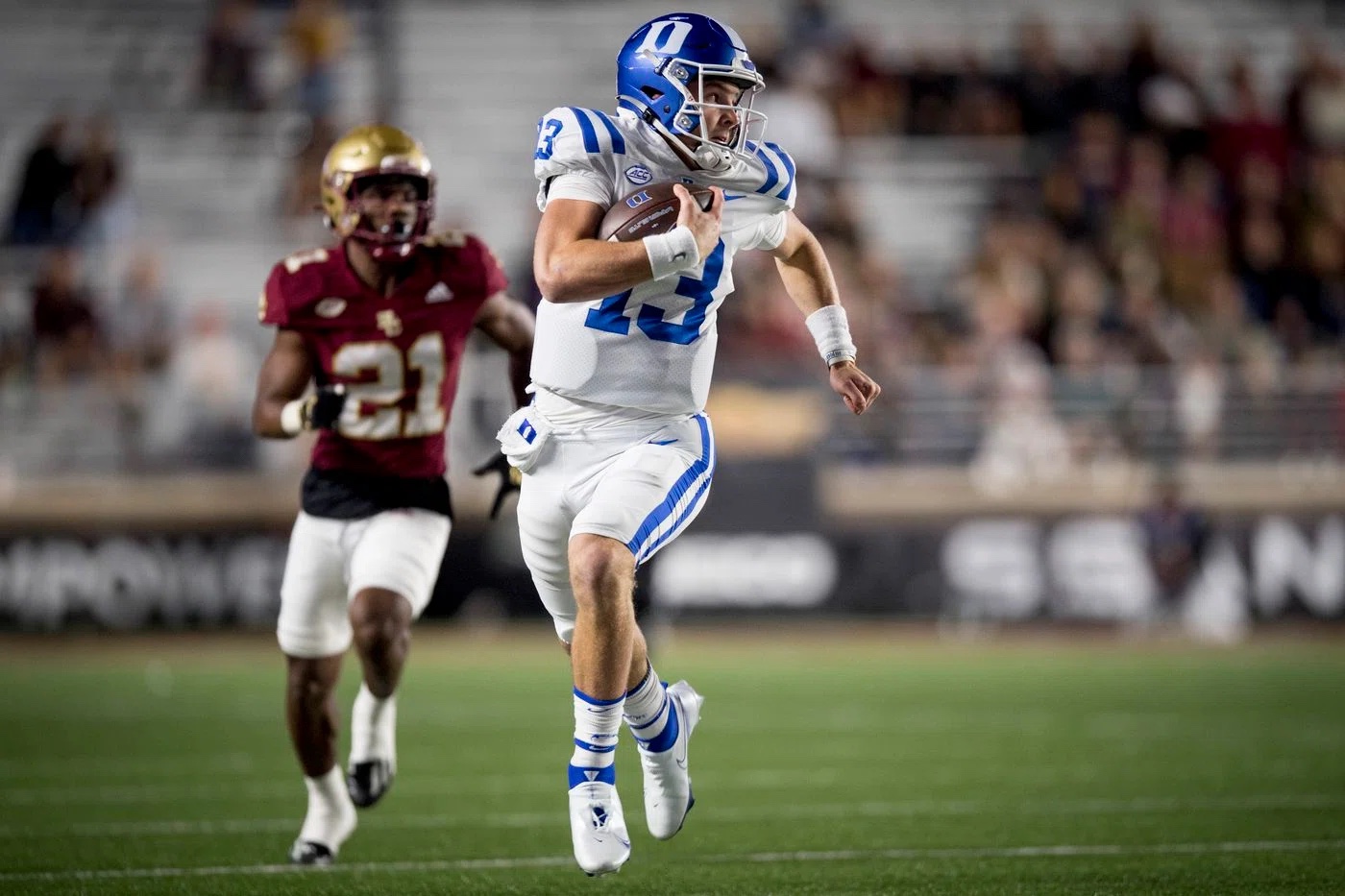 The Blue Devils started with a quick six-play touchdown drive with three of the plays consisting of Jordan Waters’ runs of 13 and 9 and QB Riley Leonard going for 60 up the middle and down the right sideline. BC tackling on that first drive – as it was last week at UCONN –  left something to be desired early. It also was a harbinger of things to come as the Blue Devils rushed for 232 yards and had the big runs when they needed them.

Leonard came as advertised as he rushed for 111 yards with a score and at times his individual talent was on full display. Several times he prevented a drive killing sack and turned it into a showcase. He also passed for 158 yards with a TD.

BC coach Jeff Hafley watched this rerun from the sideline and understands that the slow starts can’t continue.

“We have to start faster on defense,” he said.  “We have to come out tackle, and make those plays earlier for sure. We will make sure we will address that.”

The Eagles hung in early and did so thanks to redshirt freshman Emmett Morehead. This was his first collegiate start and he immediately answered the bell with a six-play drive that culminated with first of two end zone catches on the night by Zay Flowers, who again showed how brilliant he is. The score was 7-7 with 8:06 to go in the first quarter but at that point field position – thanks to key penalties in the kicking game -eventually put BC in a 24-7 hole. Just before halftime, BC’s average field position was just their own 16 yard line while Duke had the advantage of their own 36. For the game, Duke started at their 40 while BC started at its 19 on average and it made all the difference in the world.

“Field position, field position was not good enough” lamented Hafley. “The return game really hurt us, the two holding calls on the kick returns put us in really bad field position and if you think about Emmett trying the operate the offense backed up it is a lot harder and really hurt”

Despite that, the Eagles used a 75-yard drive just before halftime to cut the deficit to 24-14. Springfield true freshman wide receiver Joseph Griffin grabbed a two yard Morehead toss and the Eagles had momentum and the ball to start the third quarter.

However, a three and out on the first second half series (one of six such happenings on the night) allowed Duke to push the lead to 31-14 just about midway through the third quarter. Jacquez Moore ran through the BC line for a 24 yard score, one of two scores he had.

That score changed the complexion of the game and for the most part, left the Blue Devils in charge. It did not mean BC quit though. The Eagles had fight in them all night long and were eventually able to cut the lead to the final margin as Morehead showed that he is a guy that has what it takes to lead BC. He finished with impressive numbers, going 27-45 for 330 yards and four touchdown passes (two to Griffin and two to Flowers).

Morehead’s performance leads to the question of what does BC do when and if Phil Jurkovec is healthy enough to play? It means a decision has to be made and Jeff Hafley of course did not give an answer when asked about it. However his answer was telling when he said, “it is a fair question.”

All year long, BC has been searching for a compliment to Zay Flowers and Griffin surely answered that call on Friday night. The fabulous 6-4 freshman gathered five catches for 103 yards and the previously mentioned scores. Seemingly, he has a very bright future ahead of him.

The Eagles also did something they have not done all year, ran the ball well at times. BC had 28 carries for 108 yards. Freshman Alex Broome brought a different dynamic to the BC backfield with 10 carries for 50 yards. The running attack also allowed Morehead time to find receivers. He was sacked 4 times though but it was a result of Duke rushing 7, when they needed to try and stop BC’s momentum.

If you’re looking for positives moving forward like this coaching staff will be, the Eagles out-gained Duke 405-390. Performances like this for the rest of year can be a jump start to next season, but right now, it’s hard to see any light at the end of the tunnel if you’re a BC fan.