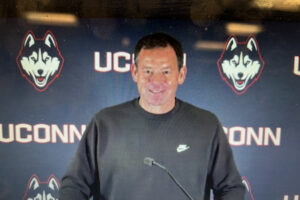 The only way the historic win over Boston College truly matters is if UConn can follow it up with a win over UMass this Friday night.

The Minutemen and Huskies began this season at the ground level of program rebuilds. Don Brown and the Minutemen have struggled to get results, while Jim Mora has his team two wins from a bowl game with three left in the season. It’s been a mind blowing turn of events given how many injuries UConn has had, but Mora knows this week is no walk in the park, but the Huskies are looking forward to matching up against their rivals on a short week.

“It’s exciting to be prt of this game, Connecticut vs. Massachusetts, I know it means something to all of us, to both sides, I know it means something to our players,” Mora said during his weekly press conference. “Massachusetts beat Connecticut last year. I’m not saying that’s a motivating factor for them, this is a different team, but they’re aware of it.

“They’re motivated by the fact they want to go out and play well and try to win. I think it’s going to be a great game. I think you throw records out in these types of games. I think it comes down to guys playing hard and physical. The team that doesn’t make mistakes and the team that capitals on opportunities usually comes out the winner.”

Mora also knows that with the success comes more eyes and more attention on the program, which should make for one heck of an atmosphere at The Rent under the lights.

“I think it should be a great environment,” said Mora. “Our players are looking forward to being at The Rent at night under the lights. Hopefully there’s a good crowd and we’re excited to go out and compete again.”

With the quick turn around, UConn has switched up its schedule this week to try and get as much recovery as possible in while also making sure that preparation doesn’t take a back seat.

“We changed the schedule up a bit Monday, Tuesday and Wednesday. It’s a short week. We wanted to make sure we maximize our preparation time, maximize the time our players have to rest and recover and yet still get in the work we needed to get done on the field,” he explained. “We moved our practices to the evening…it gives us a little more time in the morning to watch film as a staff. Our players can get off their feet and get rested and ready to roll on a short week.

“I’ve always felt like the important thing on a short week is to be mentally focused and to be as fresh as possible. We’re not adding a lot in the game plan on offense and defense, we’re just trying to do better, play harder, play with more focus and less human error and build on some of the good things we’ve done and try to eliminate some of the things that have hurt us as a football team.”

Mora may be new to the rivalry, but when the Minutemen hired Don Brown, that’s when he knew things were going to be ramped up between the two schools.

“For me, I think it was when they hired Don Brown, someone I know and have a ton of respect for. It was more ‘oh, man, this team that we’re going to play just hired a hell of a football coach,’ a guy I really respect,” Mora added when asked when he first knew how big this game was for both schools. “I didn’t know him much as a head coach because he wasn’t around when I coached before, but I certainly knew him as a defensive coordinator and the things he did at Michigan.

“I was on the sidelines last year when Arizona played Colorado, I was on the Arizona sideline with Jed Fisch and was around Coach Brown a lot on that day. He didn’t know I was around because he was focused in, but I got to listen in and watch him move and interact…I was really impressed with him, which I knew I would be going in.”

Mora hadn’t;t heard much about the rivalry before then, but he’s well aware of just how important this weekend is now.

“In terms of the rivalry, it wasn’t something that was talked about a lot, but it just makes sense,” he said. “It’s Connecticut and Massachusetts. What are we, 16 miles from the border here? Something like that. It’s only natural. Even for a guy coming from as far away as I did, you know this is important. It’s the University of Massachusetts and the University of Connecticut.