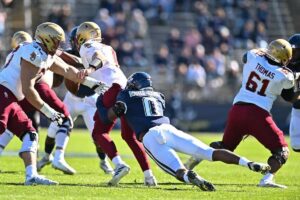 EAST HARTFORD – It can’t get any worse, can it?

In a year derailed by injuries and inexperience right from the start, the Eagles hit what is hopefully rock bottom on Saturday afternoon, losing 13-3 to UConn for the first time ever.

In fairness, UConn is in the middle of a resurgence under Jim Mora and has been playing with a ton of confidence lately. The Huskies got to 4-5 with the historic win and are very much alive in the bowl bid conversation despite a plethora of injuries to their squad as well.

BC is now 2-6 overall, 1-4 in the ACC, lost its first game to a New England opponent since 1978 and worst of all, Phil Jurkovec was injured in the third quarter and didn’t return to the game with what was termed a “lower body injury” at the time. Jurkovec was later seen wearing a brace on his right knee.

The Eagles gained 335 yards of total offense and only gave up 280. The defense has done its best to keep BC in games this year, but the lack of health, depth and experience at key positions has brought nothing but lackluster performances on the other side of the ball. An inability to establish the running game (76 yards on Saturday) and turnovers (five) remained an issue too.

“We need to coach better on offense, we need to execute and make more plays on offense, so it’s coaching and playing,” head coach Jeff Hafley said postgame. “I’m not turning this into offense and defense…we had chances, we just didn’t execute and make the plays that were there. Very disappointing and ultimately, I need to do a better job and we’ll go back to work.”

UConn jumped out to a 10-0 before anyone could blink on Saturday, scoring a touchdown on the third play of the game, but the defense stood tall for the rest of the afternoon despite being put in tough situations often with short fields to defend.

“The turnovers in critical situations killed us,” said Hafley. “I felt like we were sleepwalking on the first drive and it didn’t look like who we were normally. I’m not sure why and obviously, I need to figure that out. We didn’t tackle well, we just missed tackles on that first drive, it was really nothing other than that.

“Then, we regrouped them and kind of got them going a little bit and obviously I made the decision to go for it on the fourth and one (at the BC 35) that we failed to execute and they held them to a field goal. That was really their 10 points of the game up until the very end when we fumbled the ball…they couldn’t really move the ball on us after the first touchdown. Ultimately, you have to be able to score points to win games and we’re failing to do that.”

So, now what? This is easily the most adversity Hafley has had to deal with since taking the job in December of 2019. Covid seems like a cakewalk compared to the backlash and outright anger the fan base is now directing towards him and the staff. With the nature of the business, the “hot seat” talk will unquestionably start after a loss this monumental, but it isn’t fair yet.

Injuries are always a tough excuse to bring up, but they legitimately sabotaged the season before it could ever really get started and you simply can’t find a substitute for experience. There are flashes from a bunch of young guys that Hafley recruited – particularly on offense with Broom and Griffin – and with Morehead possibly getting some more time now and Jurkovec’s future in question, we may start getting a peak at what the 2023 team will look like.

Hanging by a thread as it is, Duke, NC State, Notre Dame and Syracuse remain on the schedule, which means BC is almost certainly out of the running for a bowl bid unless something drastically changes. The next four weeks could and probably should be treated like a camp evaluation period of sorts as the Eagles try to navigate their way out of this truly shocking tailspin.