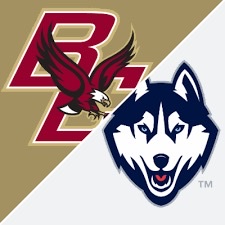 Kickoff: In a rather stunning turn of events, this weekend’s matchup at The Rent has significant meaning for both Boston College and UConn. The Eagles are just in desperate need of a win – by any means necessary – while it’s the Huskies who are now fighting for their lives when it comes to a bowl bid. A UConn win would put them in a fantastic position heading into the final month of the season. Meanwhile, BC may not make a bowl even if they win on Saturday, but a loss would undoubtedly end those hopes.

First down: Both these teams are absolutely ravaged by injuries. UConn might actually be the healthier team, which isn’t saying much. BC is basically a daily episode of MASH at this point, with guys seemingly dropping by the day. It sounds far too simple, but the team that stays healthiest through this one might end up winning. Don’t expect a shootout either, this one has 17-14-ish type game written all over it.

Second down: The quarterback matchup here is fascinating. On one side, you’ve got veteran Phil Jurkovec who has had a very frustrating season. Jurkovec is probably just looking to get through the year healthy at this point and then reassess his options – whether that’s the portal, NFL Draft or one more year with the Eagles – whatever the case may be, there will be discussions and decisions coming this offseason. Meanwhile, UConn is playing with house money so to speak when it comes to the QB position. Zion Turner has filled in admirably after being thrown into the fire earlier this season. Win or lose for the Huskies on Saturday, any experience Turner continues to accumulate is a positive thing for the program as it rebuilds on the fly.

Third down: If the QB matchup is fascinating, the coaching matchup is equally as intriguing. BC head coach Jeff Hafley is trying to navigate the rough waters of a surprisingly bad third season at the helm. At some point – whether it’s fair or not – his job security is going to be questioned whenever this season ends. A loss against UConn would be a first in program history and would only make those conversations ramp up quicker and louder. On the other side, an upset win for Jim Mora may cement his job for life in Connecticut. Mora has already done more with the program this year than was expected, and a historic win over the Eagles would only prove how much his team has bought in to his message and coaching style. It’s a no-win situation for Hafley and a win-win for Mora as long as the Huskies don’t get blown out.

Fourth down: With so many injuries it’s hard to pinpoint exact matchups that may determine the game on the field, but another major coaching matchup is UConn offensive coordinator Nick Charlton against BC defensive coordinator Tem Lukabu. Charlton has had to adjust things on the fly throughout the year as various guys have gone on the shelf, but the former BC grad and Maine head coach will undoubtedly have some stuff cooked up for this weekend. Tem Lukas’s defense has mostly been the reason the Eagles have been in some games and that side of the ball has been much healthier than the offensive side. It’ll be interesting to see how Lukabu tries to rattle Turner – he is still a true freshman after all – and if he’s able to get the young kid to turn the ball over. The Eagles offense needs good field position since it hasn’t really been able to move the ball well this season, so the defense will need to come up with some takeaways, other Charlton may just run the ball 40 times and keep Jurkovec off the field.

Extra point: It’s buzzard world. At the beginning of the year, BC was supposed to make noise in the ACC, possibly make an ACC title game and show that the Hafley Era is fully upon us. Instead, it’s UConn who looks like the team on the rise and one that should be competing against high level competition sooner rather than later. No matter what happens this weekend, UConn being good – or at least better than advertised – and BC seemingly headed for a tailspin really throws a monkey wrench into the entire New England college football landscape.

Final drive: Don’t be surprised if UConn wins this game. While it would be a massive upset and cause BC fans to lose their minds, this Huskies team is a lot better than people think. There’s legitimate talent across the board but most importantly, the buy-in is very, very real. The times they are a changing, and it feels like for at least one afternoon at The Rent, it’s UConn’s time to show the world the return to prominence isn’t far off.