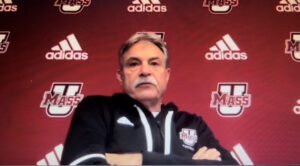 One win heading into November wasn’t what UMass fans had in mind when the second Don Brown era began. At times this season, there’s been tangible evidence of improvement, but it obviously hasn’t produced victories.

Almost every week, we’ve told you how much UMass is improving but they keep losing. So, are we just homers? No. This is truly a process and Brown is in it for the long haul. On Tuesday, the head coach of the Minutemen talked about how the team treated the bye week and what his mindset is looking ahead.

“I just like where we are at this point in time,” Brown said. “I still think we’re just scratching the surface. There’s a lot of growth still to be had there…we had a few guys, especially on the offensive side that needed some time off. They were able to get that, but at the same time it gave us the opportunity to get a good jump on some of the fundamental things we need to work on in all three phases and get a jump on New Mexico State for sure.”

There is nothing more important for this coaching staff right now than recruiting, which was also a huge part of the bye week. As the Minutemen look to give younger guys experience, there is always upcoming talent out there and Brown has been watching that talent around here for a long, long time. Of course, the transfer portal is also the new game changer when it comes to college athletics.

“It’s a big week for us,” said Brown. “We had all hands on deck later in the week and covered a lot of ground, covered a lot of games. Nice to get into some oft the schools and the prep schools and just catch up with guys you have great relationships with. Recruiting’s probably as important as anything we’re doing at this point in time.

“Right now, we have between 10 and 12 guys verbally committed. Now, what does that mean? Two weeks form now you could get a hand grenade thrown into it and then you’re starting from scratch. At this point in time, that’s where we are. I like the guys we have, and obviously the next piece we’ll shift to, is getting more aggressive in the portal as things start to develop there at the end of November, beginning of December.”

As this team continues to grow on the fly, UMass fans can take solace knowing Brown is encouraging as much competition as possible in order to get better, including at the most important position on the field.

“We told the guys going into the bye week, competition’s a beautiful thing, have at it” Brown said when asked about the quarterback situation. “Obviously, that’s what we’re doing. We’re trying to get everybody a good amount of work…we’re starting to see some growth out of a couple other guys as well, let’s keep competing.

“We’re not a finished product by any way stretch of the imagination. We’re still working hard, trying to get better and figure out who our best options are going to be.”