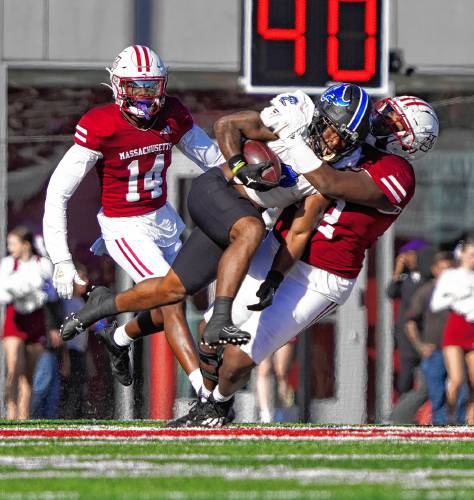 AMHERST – The beautiful fall backdrop of McGuirk Alumni Stadium was the setting for a Buffalo Bulls 34-7 win over the UMass Minutemen. An early 17-0 hole proved too much to overcome, as a sputtering offense and inconsistent defense doomed the Minutemen before a crowd of 13,378 fans.

Known for their solid secondary play so far this season, the Minutemen suffered through one of their more frustrating outings. Buffalo junior quarterback Cole Snyder (20/31, 277 YDS, 3 TDS, 2 INTS) made a number of big time throws en route to the most yards against the Minutemen through the air this season.

After being considered day-to-day from a knock he suffered against Liberty last week, redshirt sophomore quarterback Garrett Dzuro (7/14, 99 YDS; 10 CAR, 12 YDS) started his second straight game for the Minutemen.

Dzuro struggled with consistency but made a few decent throws in spite of an offensive line that left him with very little time to be comfortable in the pocket.

UMass Head Coach Don Brown was incredibly proud of his effort in the loss.

“Our quarterback was an animal today,” said Brown. “He did everything necessary to get back out on the field and I thought he competed at a high level.”

Redshirt senior running back Ellis Merriweather (10 CAR, 21 YDS, 1 TD) returned to the lineup after missing two games, but didn’t provide much of a spark. Redshirt sophomore Kay’Ron Adams (11 CAR, 65 YDS) looked the more inspired back between the two.

While Brown was happy to see Merriweather back out there, he was happy with the way Adams played.

“He’s one of those guys that can run through the tackles with the best of them, ” noted Brown. “I am really happy for him, he’s just a blue collar guy who goes about his business.”

While these won’t appear in a stat sheet, the Minutemen defense had a couple of opportunities to stop the Bulls offense, especially through the air. While sophomore Jordan Mahoney and junior Josh Wallace each had an interception, there were at least three or four others that were dropped or tipped by UMass defenders.

After a three and out to start the game for the Minutemen offense, the Bulls drove down and got the scoring started with a 39-yard Alex McNulty field goal.

Two more Minutemen offensive possessions stalled and gave way to a 7 play, 80-yard drive that saw a four-yard rollout pass to Quian Williams (3 REC, 9 YDS, 1 TD) give the Bulls their first touchdown of the game and a 10-0 lead.

Another poor UMass offensive possession would give the Bulls the ball back to extend their lead to 17-0 on an 84-yard run from redshirt freshman Al-Jay Henderson (5 CAR, 99 YDS, 1 TD)

Coming into this game 106th in the nation in total rushing defense, the Minutemen played fairly well in the trenches. While they surrendered 203 total yards on the ground, 84 of those came from Henderson’s sole breakaway.

The UMass offense finally showed some life with an impressive 10 play, 75-yard drive that ended with a five-yard Ellis Merriweather touchdown run to cut the Bulls lead to 17-7.

Buffalo responded on the very next possession with a 49-yard touchdown pass to graduate student Justin Marshall (3 REC, 75 YDS, 1 TD), which closed the first half scoring and gave the Bulls a 24-7 lead.

A quiet third quarter from both sides only yielded three points from another 39-yard Alex McNulty field goal, extending the Bulls lead to 27-7.

With Josh Wallace getting the Minutemen’s second interception of the day just before the end of the third quarter, the next quarter began with yet another three and out from the UMass offense.

With 11:59 to go in the fourth quarter, Don Brown brought out sophomore quarterback Zamar Wise (1/5, 9 YDS; 5 CAR, 12 YDS) to lead the offense for the rest of the game. Despite one trip to the red zone that ended in a turnover on downs, Wise didn’t alter the game too much.

A massively needed bye week greets the Minutemen at a time where there is much to be addressed.

Defensively there’s been promise, especially in the secondary with Jordan Mahoney and Josh Wallace leading the way.

Offensively, it’s been about as difficult as things come for a team, with the Minutemen having rolled out four different quarterbacks so far this season.

“Are we 100%, rocked up, clean as a whistle? No, we’re not, I’d be lying to ya if I said we were,” noted Brown. “We’re not where I want to be yet, but I guarantee you we will be, and I see that there’s positive steps being made”

Brown and his staff will surely take the next two weeks to get their squad healthy, make some adjustments, and figure out the best way to turn their losses into wins.

A very winnable game against one of the FBS’ worst, New Mexico State, greets them on Saturday, October 29th for Homecoming weekend when they return to action.