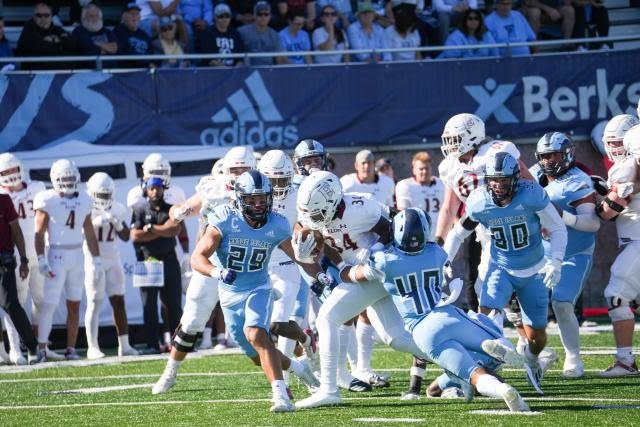 Arguably no play will be bigger than the one he made in the fourth quarter of No. 22 Rhode Island’s CAA game against No. 14 Elon before a sell-out crowd of 5,415 at Meade Stadium on Saturday.

The game was tied at 10 and the Phoenix had a third-and-seven on their 14. Martin intercepted quarterback Matt McKay and returned the ball 16 yards for a touchdown as the Rams upset Elon, 17-10.

“Coach calls the play, tells us our job and we have to finish, hope for the best and that’s exactly what happened,” Martin said. “I did my job and results happened. I ended up getting a pick six off a great call by coach (defensive coordinator/defensive backs coach Jack) Cooper and got the job done.

Another key to the victory was Rhode Island’s ability to run the ball, especially in the fourth quarter which forced Elon to burn all of its timeouts.

“I always say not only is that the best ‘O’ line in the conference it’s the best in the nation,” quarterback Kasim Hill (17-29-201) said. “I’ll go to war with any of those dudes any day of the week anywhere. I have a lot of faith in them going forward the rest of the year.”

What made the victory even sweeter was the fact Elon (5-2, 3-1) knocked the Rams out of the playoffs last season.

If you were in the locker room last year after that game you would understand the feeling,” Hill said. “I’ll keep that in house for now.”

Due in large part to a 19-yard punt by the Rams Davey Shaum-Bartocci, Elon gained possession on URI’s 27 late in the first quarter.

Moments later Skylar Davis added to his school-record, field goal total by kicking a 33-yarder – the 62nd of his career.

That 3-0 lead held up until the second quarter when the Rams caught a massive break.

URI had third-and-goal on Elon’s 4 when it appeared that Hill had fumbled and the Phoenix’s Marcus Hillman scooped up the ball and ran 96 yards for an apparent touchdown.

After the officials reviewed the play they determined that Hill’s arm had forward motion which negated the fumble and enabled the Rams to maintain possession.

As a result, the Rams were able to tie the game on a 21-yard field goal by Harrison Ford early in the second quarter.

But that tie lasted only six minutes because Elon commenced an 11-play, 75 yard drive which culminated when Jalen Hampton wedged over from the 4.

One of the key plays in that drive was a 24-yard completion from Matt McKay to Bryson Daughtry which gave Elon a first down on the Rams 4 and a 10-3 lead at the half.

After Elon blocked a 32-yard field goal attempt by Leonard, the Phoenix went three and out and the Rams capitalized by driving 57 yards in seven plays with Hill busting seven yards off left tackle for a touchdown with 17 seconds left in the third.

“That’s a signature win,” coach Jim Fleming said. “End of story. It was a tough fought battle against a good football team in the CAA. Defensively we played incredibly lights out and properly won it with a pick six. It was a complete team victory.

“That’s a tough out. I couldn’t be more proud of their effort and preparation.”