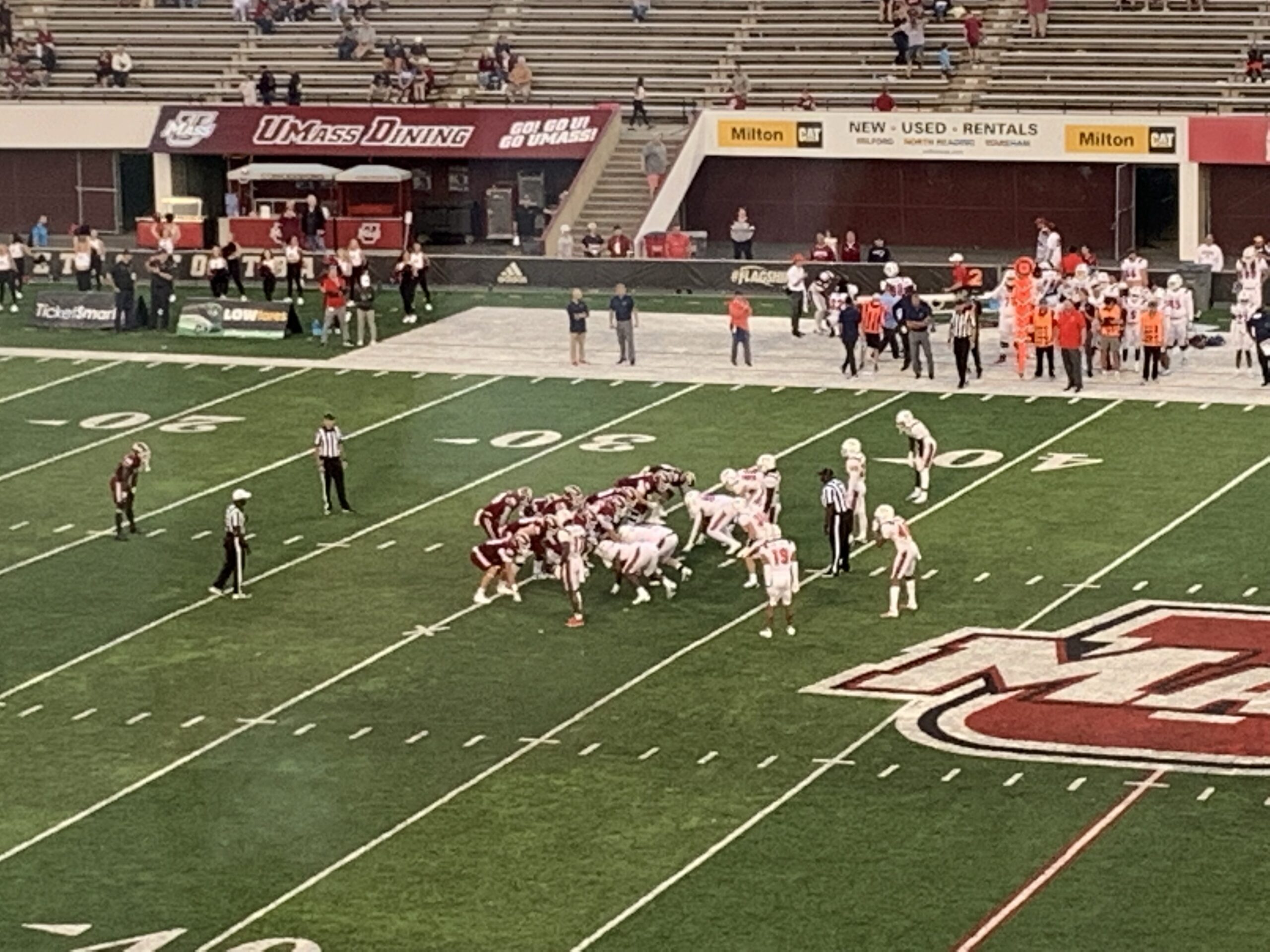 For years, UMass football fans have worried if one loss would turn into two, two into three, three into four, and so on, until another one-win season was staring them in the face.

Now, the loyal fan base can wonder, ‘can one win suddenly turn into two this week?’ after beating Stony Brook in the home opener. There’s a different energy around the program and a feeling like things are moving in the right direction.

Obviously, a win over FCS Stony Brook doesn’t really tell us a whole lot about exactly where this program is at during the rebuild process, but when head coach Don Brown and quarterback Gino Campiotti spoke during the team’s weekly media access on Tuesday night, there was a clear air of confidence that hasn’t been seen or felt around the Amherst facilities in quite some time.

Winning will do that for ya.

“I’d be lying to say we didn’t go into the first two weeks expecting a win,” Campiotti said. “I do think the energy is definitely different. Not purposefully, but, once you do something, you know you can do it. We know we can win. We know what winning football looks like and feels like now. We left a lot on the field and truthfully, I think that we know what winning football feels like now and that carries over.”

Getting that first home win and experiencing a lively McGuirk Stadium was a moment that most of the Minutemen – particularly Campiotti – had been waiting for eagerly.

“It was incredible,” he added. “Just, when we pulled up on the bus and saw all the people in the parking lot, walking through high-fiving all the kids and all the different fans that were coming to watch the game, it was an incredible, lively experience for us. I know we were just soaking that in and we’re going to let that carry over. I think the opportunity to play in McGuirk after being here for seven months or so now, it was about time. I was excited for it and it was very fun.”

Not only was the first win important – Brown noted how important a first impression was earlier last week – but making sure the fans got a show was imperative. This fan base will undoubtedly get behind the program if it sees results and Saturday was a fantastic first step.

Even the stoic Brown took a moment to revel in the atmosphere.

“I thought it was really important, I thought the atmosphere was really good,” he said. “Our home side was completely full. I’m really excited about how the band performed, it gave us a lift and it’s just nice to see that again. It’s funny, they were playing some of the common music, the fight song and so forth, I was like ‘wow’, I could feel the chills on the back of my neck. I thought they really gave us a lift and I thought the atmosphere was pretty good, especially on the home side.

“It’s huge. Whenever you’re getting support from within, it certainly is an uplifting experience and it helps you stay in the battle. You know somebody’s got your back and they’re in your corner with you.”

Now, the key will be making sure the winning habits and good vibes around the program don’t dissipate with a poor performance against the Owls. Currently, UMass is just a 9.5-point underdog to host Temple, which means Vegas believes this could be another opportunity for the Minutemen to surprise some people and maybe even reach the two-win mark for the first time since 2018 when the team went 4-8 for the second straight year.

“Got back to work today, no fooling around,” Brown said when asked how the momentum could possibly carry over. “Last week’s over, it’s time to get back to work and take care of our business. We did that Monday and had a good solid work out. We dodged the rain drops for the most part and we did that again (Tuesday).”