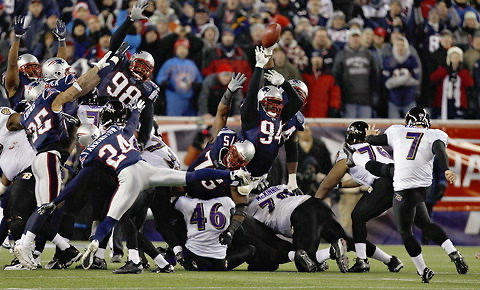 Over the last decade or so, the Patriots-Ravens rivalry has turned into one of the best in all of pro football.

Whether it was the Rex Ryan timeout game on Monday Night Football in 2007, the 2011 AFC Championship game and Billy Cundiff’s missed kick, the (ugly) 2012 AFC Championship game, the double pass/eligible receiver playoff game of 2014, or one of the Sunday night slugfests the teams have had both here and in Baltimore, it’s hard to find another team that’s given Patriots fans more heart palpitations than the Baltimore Ravens.

The Ravens were never an AFC East rival, but they sure feel like one. Bill Belichick stepped to the podium for his weekly Wednesday press conference and immediately declared “it’s Ravens week.”

Not all teams get the name-week treatment like the Ravens, Jets, Steelers, Bills or Colts, but this one’s a big one on Sunday. Not just because the Pats can show the league their demise has been grossly over exaggerated and not just because the team can get to 2-1, but you add on the Vince Wilfork retirement ceremony this weekend and the fact that it’s the home opener, and this is as close to a playoff atmosphere as you’ll find in September.

“As always, good football team. Steve Bisciotti, Ozzie [Newsome], now [Eric] DeCosta, John Harbaugh, been a while with consistency down there. Put out good teams every year. Well balanced teams, offense, defense, always good on special teams. It’s a big, big, big challenge for us this week. Looking forward to digging into these guys, getting them ready to go on Sunday,” Belichick said on Tuesday.

This game is also going to be a massive test for a Patriots team still trying to figure out where it stands in the evolving NFL landscape against one of the more well-respected franchises in the league.

“I think the Miami game really just showed how explosive they are,” Belichick added. “With the kickoff return, long run, long pass for touchdowns. We know they can score on defense with their ability to create turnovers. One of the best turnover teams within the last, whatever, five, 10, 15 years, whatever you want to track it. Strip sacks, ball hogging guys in the secondary, and an outstanding kick blocking team, field goals and punts and returns.

“They can really hit you on just about every play if you’re not careful. Got to play a good fundamental game, have to play smart situational game. It’s a physical football team that likes throwing the ball. Compliments that with some explosive pass plays. Obviously, [Mark] Andrews, one of the top guys in the league in his position. Big target, great hands and makes all sorts of plays for them. Had a huge year last year and is building on that this year. Just a well-balanced team. It’s going to take a good effort from everybody all the way across the board to do well Sunday, but that’s what we’re gearing up for.”