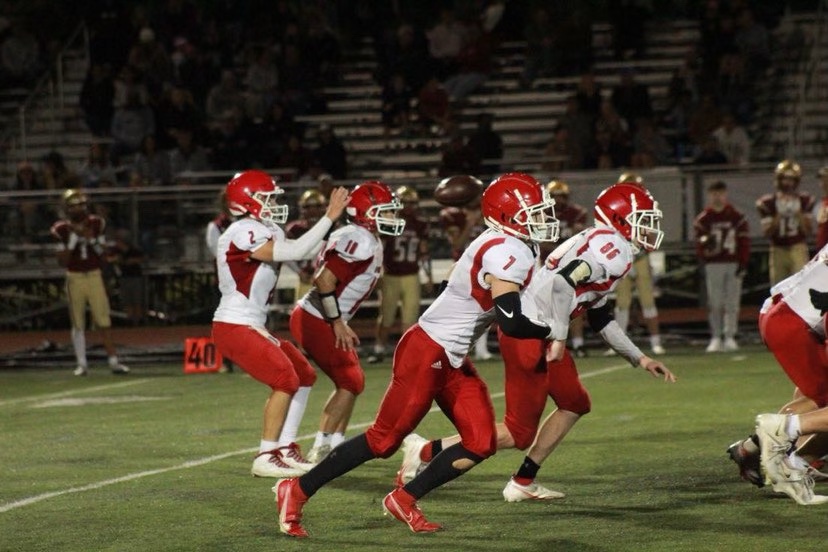 Week three is over in New Hampshire and it is too early to start talking about playoffs??

Londonderry staying at the top of the rankings for another week. After Londonderrys loss in week two no one expected them to come out and not put a beating on Windham but that wasn’t the case Windham came out swinging and Windham was up 14-10. In the second half Londonderry came out and shut out Windham and won 30-14.

Pinkerton advances to 3-0 after putting on a show against Alvirne and only holding them to 6 points the whole game. Pinkerton won 42-6. Pinkerton plays Londonderry in Londonderry for their biggest game of the year.

points on the game. BG was led by senior Matt Santosuosso who finished the game with three total touchdowns and adds to his amazing senior campaign.

Pelham continues to put up crazy numbers after moving up divisions this time against John Stark. Pelham held John Stark to 14 points and put up 55. After three weeks through the 2022 season Pelham has only allowed 21 points.

North continues to add to their undefeated season this time beating Keene 28-13. With

two huge x factor players on offense with Derek Finley and on defense Toby Brown who continues to add to his defensive player of the year campaign.

Winnacunnet in week four who is 0-3. After a not so strong opponent in week four they do have a tough road after that with games like Timberlane, Dover and Spaulding.

Spaulding a team a lot of people were not expecting to have this type of season start the year off 3-0 after a huge win in week three over Portsmouth-Oyster River 12-10 with a game sealing interception by Kaiden Melendez. They have a huge game against Dover who is also 3-0 in week four.

Gilford-Belmont continues to put crazy numbers on offense led by junior linemen up front Michael Macaione and quarterback Isaiah Reese who had eight total touchdowns in their win over Bow 52-33.

Dover advances to 3-0 after beating Manchester Memorial 27-21. Despite Dover dropping three spots from last week rankings they look ahead to a big game in division one on Friday night as they travel to Rochester to play Spaulding who is also 3-0.

Hanover was not ranked going into week three but after beating Milford 40-14 how can we not rank them? Hanover plays a not so strong team in Hillsboro-Deering-Hopkinton in week four but their games do pick up later on in the season as they have to play Souhegan, Pelham and Gilford-Belmont.

Trinity moves to 3-0 and continues to put up monster numbers while shutting out ConVal and putting up 55 points in week three. Trinity has only allowed eight total points through three weeks of action.

Although Timberlane has a loss on the year to one of the best teams in division one Bishop Guertin they are still a really good team all around. Timberlane looks ahead to week four they play at home vs Kenne on Friday night. A quick look ahead in their schedule does not get much easier for them; they play Exeter, Spaulding and Dover.

After Concord lost their season opener to Londonderry they went on a tear in weeks two and three. In week three Concord beat Manchester Central 43-15. They look ahead and play a 0-3 Alvirne in week four.

After losing to Gilford-Belmont in their season opener they have put up 56 in both week two and three. They look ahead to play Saint Thomas in week four and will be looking to advance to 3-1 and move their win streak from two to three.

It looks like in division three there are three really good teams and Monadnock is one of them. They play Trinity in week four which is a battle of two undefeated teams in the division this will be a huge game for seeding come late October and early November.

Windham is the first team to be in the rankings with a losing record but their record does not show how they played in week three against the powerhouse in Londonderry. WIndham was in control of the game at halftime 14-10 and they could not get their offense going in the second half. They fell to Londonderry 30-14. They play Salem in week four and this is a must win game for both teams.

Campbell is one of those powerhouses in division three along with Monadnock and Trinity. Campbell has only allowed eight points through three. A huge game to watch out for his week five against Trinity.

Bow lost in week three 52-33 to Gilford-Belmont. Bow plays a good Milford team who is

1-2 in week four. This is a big game for both teams as it will help with seeding in division two in late October.

Although Bedford dropped two spots this week in the poll that does not mean they had a bad week by any means. Bedford played their out of state game against Thornton and won 16-10. Bedford can really only afford to lose one or two more games this season if they want to get back to the playoffs.

Plymouth had a big win in week three against Merrimack Valley. Plymouth won 21-10. Plymouth has a tough road ahead as they will have to play Souhegan, Kennett and Gilford-Belmont.

Kearsarge pulled out a big win against Kingswood 46-28 in week three. Kearsarge is led by senior star running back and middle linebacker John Fraioli who rushed for about 350 rushing yards. Kearsarge’s schedule does not get any easier as they have to play Trinity, Campbell and Monadnock down the road.

Although Saint Thomas has a loss this season they did get their toughest game of the year out of the way against Pelham. Saint Thomas beat Sanborn 21-15 in week three. They have a huge week four matchup against Kennett.

Fall Mountain advances to 2-1 after beating Epping in week three. Only four teams make playoffs in division three and Fall Mountain will need to beat one of the three powerhouses in the division to get in although they did already beat Kearsarge they do have the head to head over them.

A lot of people have counted out Merrimack after losing week one to Bonny Eagle 33-27. They have a big game against BG who is 3-0 in week four. The only way for Merrimack to stay in the playoff hunt is to beat a team like BG, Nashua North, or Bedford.