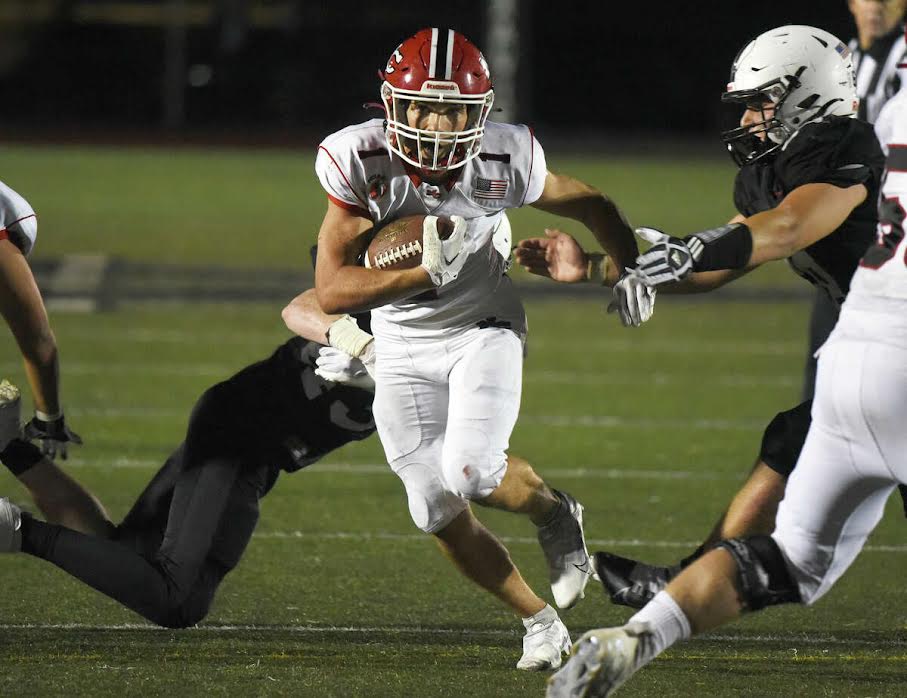 Even after they fell behind 21-0 at Ridgefield Friday, the Cardinals played to their strength: the run game. For the second week in a row, quarterback Jack Wilson had three rushing touchdowns, while Jack Konigsberg ran for 163 yards and two scores and George Vomvolakis rumbled 40 yards for a TD. Greenwich proved it can hang in a shootout, turning around the early deficit with a 42-7 run in the middle of the game.

The Rams continued their flawless start without starting quarterback Ty Groff, turning to the ground Friday at McMahon for their second straight win. Fill-in signal caller Alex Russey ran for two first quarter touchdowns, junior halfback Luke Reed ran for two scores, and Hunter Telesco followed up a 150-yard showing in Week 1 by tallying 181 yards from scrimmage, including a 45-yard touchdown. New Canaan is already tough to stop, and should create even more problems when Groff returns to open up their passing game.

The Redmen dominated a weak opponent again in Week 2, throttling Norwich Free Academy 56-6. Soren Reif had a laughably dominant day rushing, totalling 315 yards on 17 carries for 4 touchdowns, including one from 74 yards. Quarterback Thomas Driebholz threw just four passes—three for touchdowns, all to Ben Jax. Killingly has its first—and possibly only true test of the regular season next week when it hosts Bloomfield.

Tied at 13 with Simsbury, the Spartans exploded to score the game’s final 22 points in a 35-13 win over the Trojans Friday. They got three return touchdowns last week against East Hartford and two more in Week 2—a pick-six and a kickoff return score. Kyle Valentine was 13-20 for just over 200 yards in the win. After turning it over thrice, they’ve still got offensive issues to work through, but Maloney’s defense and special teams success makes them a nightmare matchup.

The Eagles dominated in every phase of the game in Saturday’s 49-7 beatdown of Westhill. Hunter Agosti was 9-11 for 180 yards and two touchdowns and Luca Antonio caught three passes for 111 yards and a score, but the star of the day was junior runner Rowan Johnston, who rushed 18 times for 160 yards and four of his team’s seven touchdowns. Trumbull passed its first two tests, and could very well sit at 5-0 entering a Week 6 showdown with Greenwich.

Shelton staked its case as a legitimate contender with its second straight rout of a Top 25 opponent, following up a 55-14 drubbing of then-14th-ranked Ridgefield with a 28-0 win over 19th-ranked Hand. Quarterback Mike Kinik completed 19 of his 22 passes. Aydin Sepkaski and David Dojilidko—who scored twice—ran for 113 combined yards. Dojilidko had two picks and Christopher Taylor had five sacks. The Gaels have a chance at a third-straight Top 25 victory when they travel to Windsor Friday.

Will Singewald posted a pair of touchdowns and the St. Joe’s offense scored 35 of the team’s 42 points Saturday against Staples, but it was the Cadets defense that stood out. Led by Jack Kilmartin, the home team caused four turnovers and sacked Wreckers quarterback Caleb Smith six times. After edging Darien in Week 1, St. Joseph looks like it can launch a significant postseason run, but a daunting schedule remains—including half of the state’s top eight teams left to play.

After a close loss to a top team in Week 1, Masuk rebounded by taking care of business Friday against Notre Dame Catholic, 38-0. Quarterback Dylan Jackson and running back Jason Champagne each scored two touchdowns as the Panthers rolled to an easy victory. Masuk’s talent level has been a pleasant surprise to this point, but it’s running out time to prove itself a contender: next week’s matchup is its second-to-last Top 25 matchup this regular season.

The Blue Wave looked Saturday like the team they were expected to be this season, downing Bridgeport Central 47-0. But lingering questions are left from Week 1’s loss to St. Joe’s, including about the strength of the rushing attack. They’ll have a shot at re-staking their claim as a top dog in a consequential meeting next week.

The Warhawks have won big twice—40-0 and 49-0—but against inferior competition—Avon and Plainville. Yet they appear to have the makings of a legitimate contender with a balanced offensive attack and stout defense. Bloomfield simply hasn’t been tested yet. They’ll be tested in a major way in Week 3 when it travels an hour east to face a team that won its first two games by a combined score of 104-6.