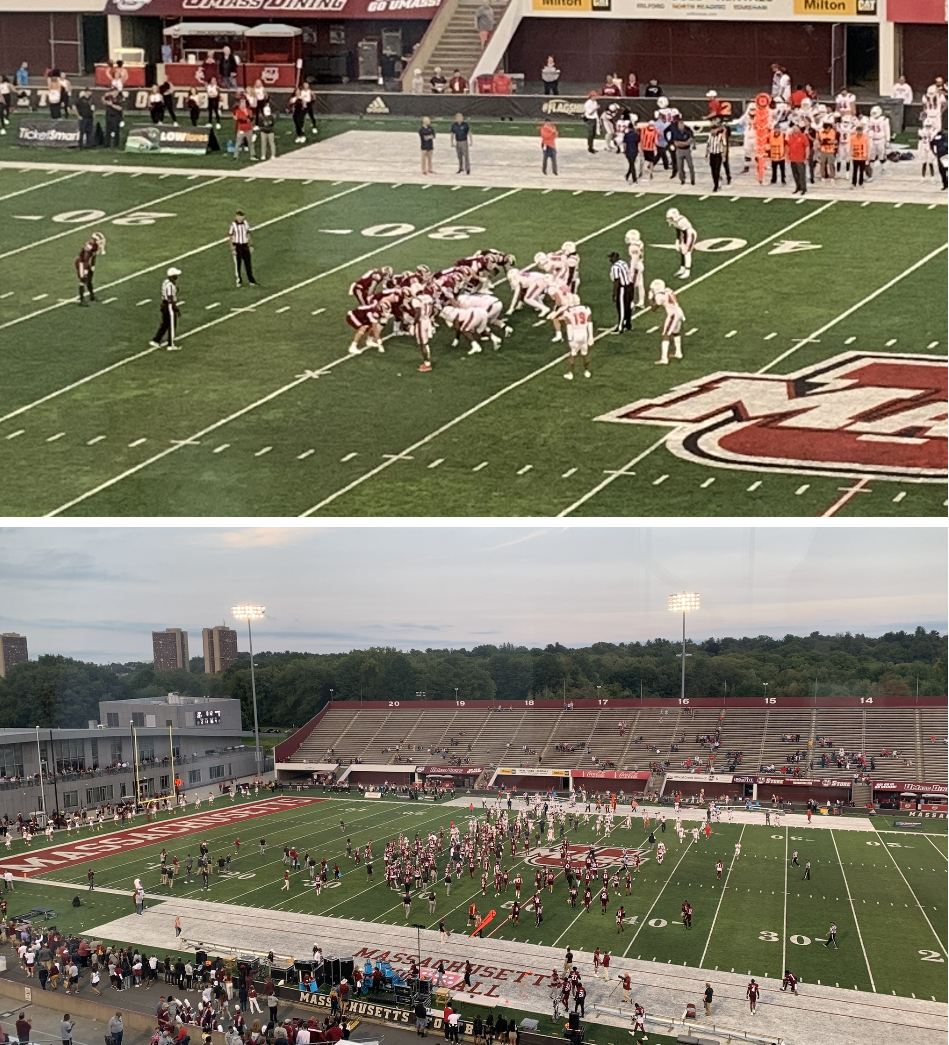 AMHERST – Homecoming might not be until October 29th for UMass, but in front of 10,011 fans at McGuirk Alumni Stadium on Saturday afternoon, they welcomed back former head coach Don Brown with open arms.

In typical Brown fashion, it was defense that got it done to give UMass (1-2) their first win of the season with a 20-3 victory over FCS-level Stony Brook (0-2).

Don Brown noted how a few drops and missed plays limited their chance to extend the lead, but stressed they’d be teachable moments to point out and work on in practice.

Still, even he had to admit this homecoming was a special one, and something he was happy to experience.

“It hit for me a little bit when I saw four of my grandchildren when I was coming off the field,” he said. “This is a special place, and all I can promise is my staff and I are doing everything to get UMass football where it belongs, and that’s in a positive direction.”

UMass sophomore cornerback Jordan Mahoney was unquestionably one of the best performers on both sides of the field for the Minutemen. Along with five total tackles and a pass deflection, his major highlight of the day came from a red zone interception he took 94-yards to the house.

Brown was quick to note he is very involved with coaching his cornerbacks, so was particularly happy for the young defensive back out of Rock Hill, South Carolina.

“He really has the innate ability to play the corner position at a high level, the only thing that stops him at times is himself,“ said Brown. “I thought he played the whole game the right way, and made several plays on the ball down the field.”

The Minutemen only recorded one sack on the day, but a stalwart front seven – particularly in the second half – made things difficult for the Seawolves to get things going. After surrendering 75 rushing yards in the first half, the Minutemen limited Stony Brook to just 52 in the third and fourth quarters.

Seawolves sophomore running back Jayden Cook (14 carries, 73 yards) particularly struggled in the second half. Senior quarterback Joshua Zamot (1/3, 20 yards;  5 carries, 21 yards), who had 84 yards rushing against Rhode Island two weeks ago, couldn’t generate momentum the entire game when he was on the field.

As much as the defense rightly earned their postgame spotlight, the UMass offense showed flashes of what it could look like going forward.

Junior Gino Campiotti (10/15, 90 yards, 1 TD, 1 INT; 11 carries, 72 yards) got the call today under center and looked very capable leading the Minutemen offense. He utilized his speed to help break off some very nice runs, and also demonstrated his strength to barrel forward for extra yards.

Despite only throwing 15 times, he looked far more confident than the last two games. His lone interception was incredibly unlucky, and probably should’ve been a touchdown, had his receiver not tipped the ball right into the hands of a Stony Brook defender.

When senior wide receiver Cameron Sullivan-Brown (2 catches, 32 yards, 1 TD) was asked about whether the mixing of quarterback combinations had any effect on the team’s play, he didn’t sound too concerned.

“I don’t think it really matters, I feel like the whole offense has confidence in anybody who’s back there,” he said. “I see them all in practice, they have been battling, they have been making plays, so we all got that same chemistry.”

With the Minutemen receiving first to start the game, an impressive 10 play, 70 yard drive was capped off with a beautiful 18 yard strike from Campiotti to Sullivan-Brown to start with a 7-0 lead.

The Seawolves moved the ball well on their first three possessions, pressing into the Minutemen half of the field on three straight drives. However, a bend-don’t-break UMass defense fended off each attempt, with the third time featuring Mahoney’s pick-six to give the Minutemen a 14-0 lead early in the second quarter.

Immediately following the Mahoney pick-six, Daron Bryden threw another interception, this time to junior cornerback Josh Wallace who made an incredibly athletic catch on a low screen pass.

With the Minutemen offense sputtering since the opening drive, a 10 play, 49 yard drive ended with sophomore Cameron Carson banging in a 29 yard field goal to extend the UMass lead to 17-0.

Stony Brook added a field goal just before the half to make it 17-3. A largely uneventful second half offensively for both teams only saw another Cameron Carson field goal, this time a 38 yarder to extend the UMass lead to 20-3.

People may try too downplay the significance of this win, but when you face as much scrutiny as this program has, you have to take every little victory you can get. Stony Brook may be an FCS program, but considering UMass was 0-3 since 2019 against this level of opponent, the Minutemen will absolutely take this as a building block for Don Brown’s restoration project.

UMass has a 2 PM kickoff in Philadelphia next Saturday against the Temple Owls.