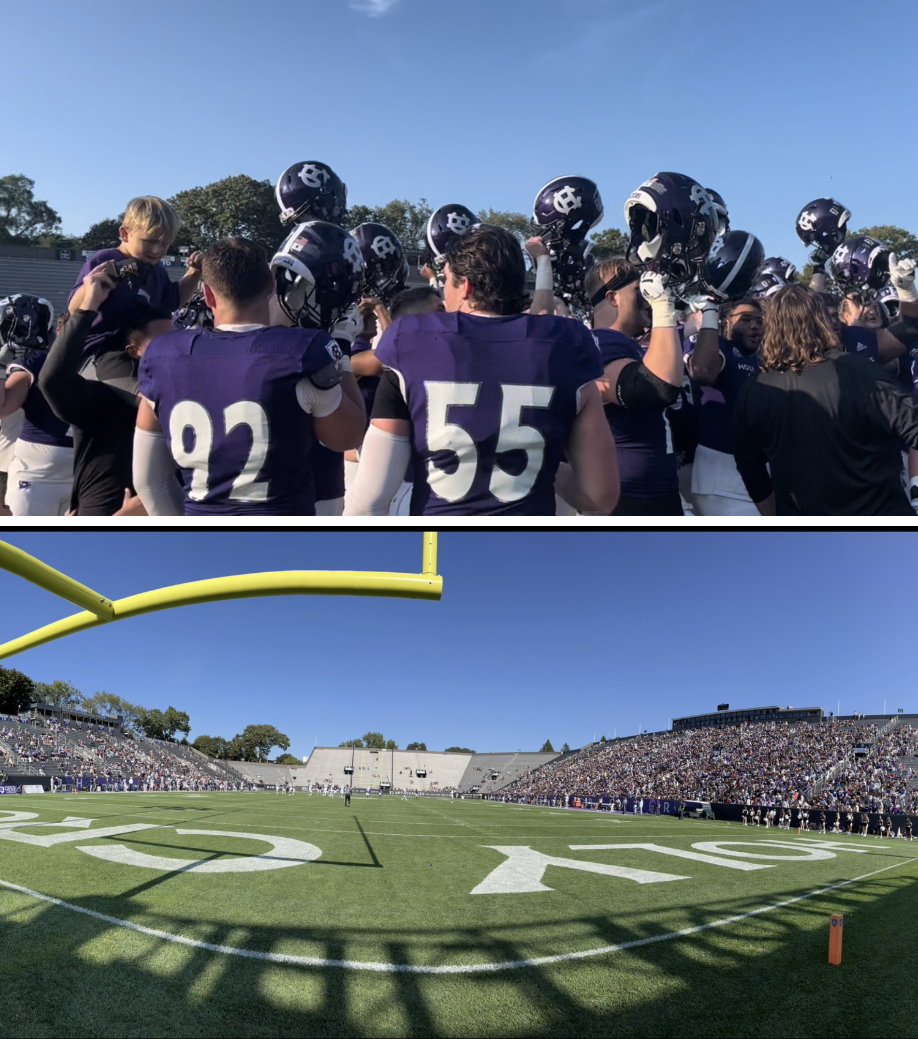 WORCESTER – Are you paying attention yet?

Something special is brewing in Worcester.

Holy Cross moved to 3-0 on Saturday with a dominating 38-14 win over Yale in the Yolked-New England Football Journal College Game of the Week.

It was also the home opener for the Crusaders and Matt Sluka put on a show, throwing for 239 yards on 16 completions with two touchdowns and a rushing TD. Peter Oliver(121) and Jordan Fuller (72) paced the ground attack. The offense put up 571 yards while the defense held Yale to just 306, led by a 14-tackle performance from Jacob Dobbs.

Holy Cross entered the game ranked 12th in the country in most FCS polls and probably secured a top-10 ranking this coming week with a thorough beat down of the Bulldogs in what was their season opener.

“I thought we played very, very hard in all phases,” Holy Cross head coach Bob Chesney said. “To be able to run the ball like we were able to, I don’t know that I knew we could definitely do that…overall a nice win. We’ll enjoy it for this evening and move on pretty quickly.”

After a scoreless first quarter that included a missed Yale field goal, a two yard TD run from Sluka on the first play of the second quarter and a PAT from Derek Ng made it 7-0. Yale responded with an eight-play, 78 yard drive that ended with. Nathan Denney one yard touchdown run, making it 7-7 with 12:01 to go before halftime.

Seven plays later, the Crusaders got tricky when wide receiver Jalen Coker threw a 36 yard touchdown pass to Tyler Purdy for a 14-7 lead. On the Crusaders’ next possession, Sluka hit Coker on a deep ball from Holy Cross’ 16 on the first play of the drive to get things started. Coker also took out half the team’s Gatorade supply on the sideline when he was pushed out of bounds.

Three plays later Sluka hit Ayir Asante from 41 yards out on a beautifully executed post pattern for a 21-7 lead that Holy Cross took to the locker room.

“Senior year (of high school), I played quarterback, and after that, no,” Coker said with a smile when asked if he’d thrown a pass like that before. “I’ve got a little arm in here,” he added while pointing to his right shoulder. “As soon as it got called I couldn’t wait to throw it. Couldn’t wait. Then, he was down there. It hung up a little more than I wanted, but I was so excited.”

“He’s got a real arm, that throw did not do it justice,” Chesney added with a laugh.

The Crusaders turned the ball over on downs the first possession of the third quarter, but quickly got it back on an interception by Devin Haskins.  Moments later, Oliver broke off a huge 41 yard run and Fuller finished things off with a 23 yard touchdown run for the 28-7 lead. Yale was driving again on the next possession but Terrence Spence came up with another pick inside the Crusaders’ five. A 10-play march ensued and ended with Sluka connecting with Coker over the middle and he did the rest on a 32 yard catch and run for a touchdown late in the third.

“Not much on my part, just a great play by him,” said Sluka.

Ng made history in the fourth quarter with a 22 yard field goal that made it 38-7. Fittingly, it was his 38th career made field goal, which set the all-time school record.

“Really nice for Derek too,” Chesney said. “38 points, 38 field goals which at that point was 38 points on the field goal to break the school record. Really cool.”

With 2:02 to go, backup QB Austin Tutas hit Lindley for an eight yard TD to cap the scoring.