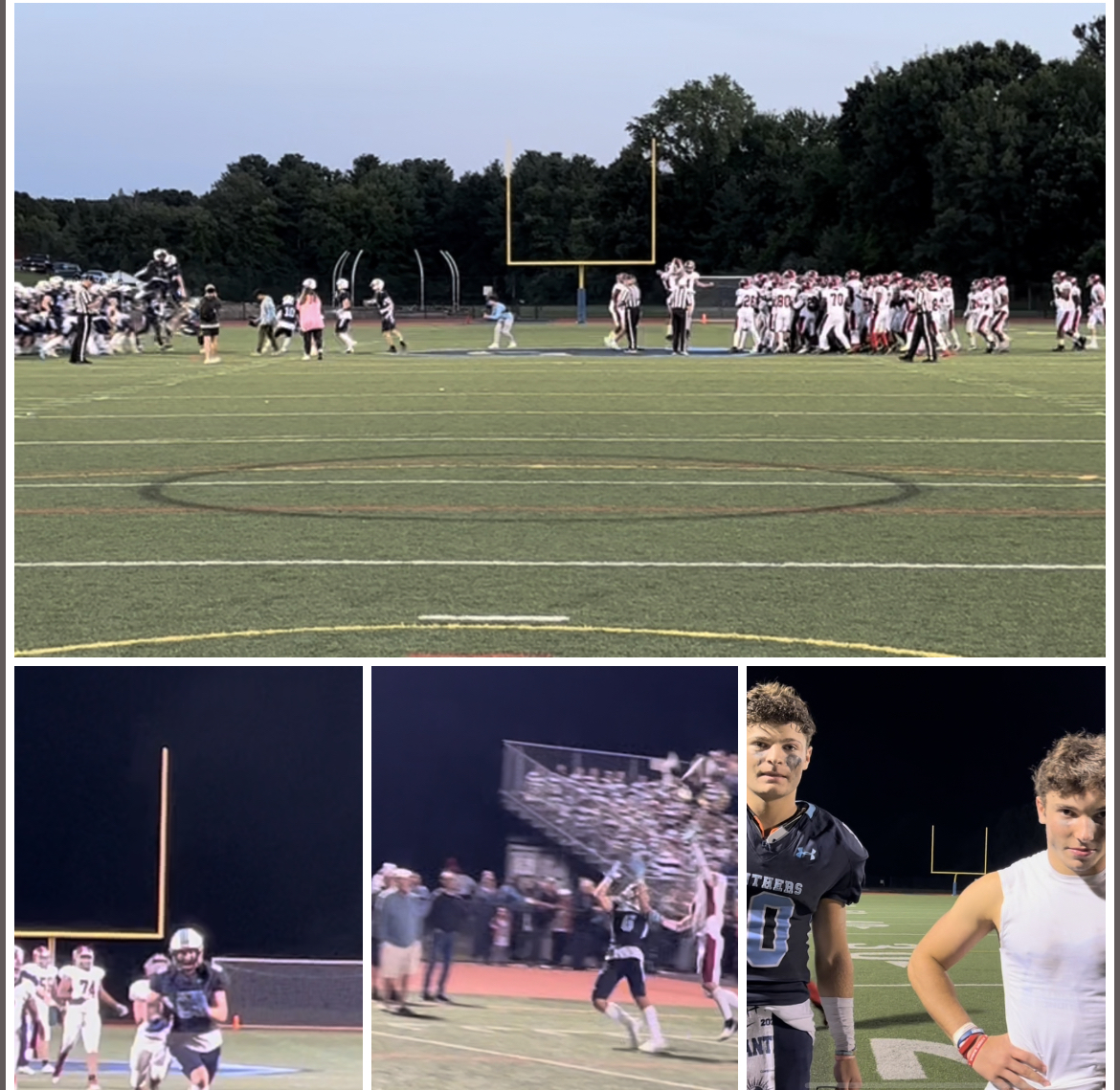 FRANKLIN – If a road win against Wachusett in the season opener didn’t make you believe Franklin was for real again, Friday night’s performance should leave no doubt.

The Panthers built a 27 point halftime lead at Pisini Field in front of a packed house and rolled to a 37-6 win over a once intimidating Brockton program in the NEFJ/Gold Athletics Game of the Week.

Jase Lyons had five total touchdowns – three on the ground and two through the air – and the Panthers defense forced four turnovers. It was a dominant performance that gets Franklin to 2-0 and sets up one heck of a matchup next weekend against Duxbury. Brockton drops to 1-1.

“Everybody all week said ‘Brockton is Back’ and they said it for a reason, that’s a really good football team,” said Franklin head coach Eian Bain. “The things they do with formations and jet sweeps, threats on the perimeter…their quarterback is very underrated, he doesn’t get talked about as much as he should, he can throw a really good ball. The amount of things they present as a problem, we had to prepare for all of that and we only had one game tape on them and a scrimmage…I’m impressed with the way we prepared.

“We dug our heels in…we stepped up in the right moments…just really proud of that preparation and that process by our guys.”

This one was over by halftime, but it was a scoreless first quarter. Franklin punted on the game’s first possession, but pinned Brockton at the five. The Boxers went on an impressive 14-play march, but it ended on fourth down with Cole Sidwell grabbing an interception at the Panthers’ 17 and returning it to his 32.

Lyons finished off the ensuing drive that started late in the first with a three yard TD run with 10:18 left in the second and Garrett Petrosi added the PAT. Grayson Hunter had an impressive 39 yard catch and run for a touchdown with 7:15 left in the half to make it 13-0 after the point after try was blocked.

Five plays later, Bobby Padula picked off Joey Cappiello and the Panthers were in business at the Brockton 45. Luke Davis hauled in a 28 yard touchdown pass at the front right pylon with a fantastic over-the-shoulder catch to push the lead to 21 points. The Boxers fumbled the ensuing kick off and Padula recovered at the 15. Lyons closed out the half with a three yard TD run as time expired for the 27 point lead.

“We always have a good game plan, coach gets us ready throughout the week and once we get in the game we know what we have to do,” said Lyons. “For me, when I got out of the pocket and started running the holes opened up for those touchdowns. Once I get the ball out to the playmakers they come down with it and get in the end zone. Everything was just hitting today.”

“That definitely sets the tone of the game,” Sidwell said of the turnovers. “I think that’s what gave us the W tonight and I think we work all day in practice to get those turnovers and get the defense right.”

Things continued to unravel for Brockton as the Boxers fumbled on the first snap of the third quarter and Sidwell recovered at the Brockton 24. Moments later, Lyons scampered in from the six. Petrosi added a 24 yard field goal late in the third for a 37-0 lead heading to the fourth.

The Boxers got a 53 yard touchdown catch from Cam Monteiro with running time implemented late in the fourth quarter.

“We try our best to humble them,” Bain said when asked about turning the page quickly for a very tough matchup against the Dragons. “We try our best to give them great, honest feedback about their performance, about how they’re conducting themselves. A lot of the stuff with our team right now is the mental.

“I think we have a really good team athletically, I think we have some great kids at all positions, but when we can learn how to play this game like men – and we’re getting there – part of that is turning the page quickly. It’s going to be a big growing test for our program.”