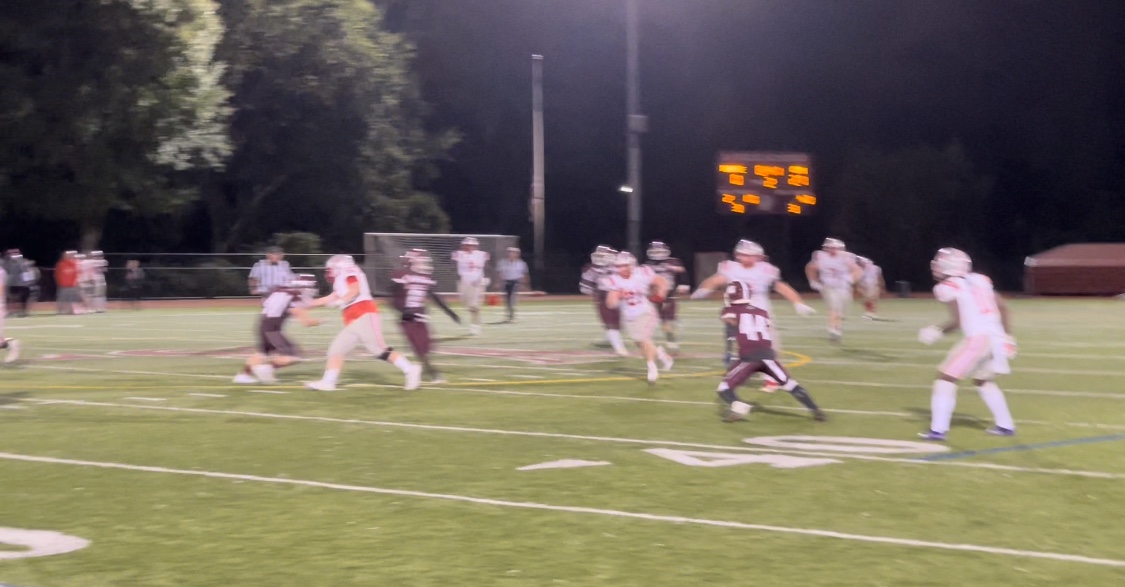 PROVIDENCE- John DiBiaso was hard on his team when we visited the team during training camp. He was in mid season form as a he challenged his team to rise to the occasion and be better. Well, they rose to the occasion on Friday night in a 47-7 win over LaSalle Academy.

The Knights were clicking on all cylinders offensively as they jumped out to a 21-0 first quarter lead. Running back Carson Harwood opened the scoring with a five yard touchdown run. After a LaSalle drive stalled, the Knights struck again when quarterback J.C Petrongolo hit receiver Mervans Amazan on a quick screen along the left side line for a 20 yard touchdown pass. The Knights scored again right before the end of the quarter after a Dean Varrecchione interception was returned to the Rams five yard line. The Knights punched it in on the next play when Datrell Jones scored his first of two touchdowns.

Jones would score again early in the second quarter to extend Catholic Memorial’s lead to 27-0. The Knights missed the extra point. Perhaps the play of the game came on the ensuing possession when Harwood caught a middle screen and weaved his way through the LaSalle defense en route to a 60 yard touchdown run to make it 34-0.

Carson Harwood takes this middle screen 60 yards to the house. Unbelievable plays. Extra point is good and it’s 34-0 in the second quarter. pic.twitter.com/inrtch6CE5

Sophomore David Timson would add another score, this time from three yards out to give the Knights a 41-0 halftime lead. Fellow sophomore Mekhi Dodd would later add a 70 yard touchdown run to make the 47-0. The extra point was blocked this time however

. LaSalle would get on the board at the end of the third quarter on a three yard touchdown run by Jared Gibbons.

I caught up with DiBiaso after the game and he was very pleased with his team’s performance.

As if Catholic Memorial wasn’t already good enough, they looked like a hungry team playing with a chip on their shoulder. DiBiaso credited his senior class for leading the way.

As for LaSalle, the Rams were shorthanded missing running back Jamezell Lassiter and wide receiver Justin Denson among others. They also lost tight end Brady Fisher to injury early in the game. Coach Geoff Marcone praised Catholic Memorial but also applauded his team for their effort.

“We had confidence coming into the game. We had a couple of guys injured but that’s not an excuse, that’s just the way it worked out. It’s hard to prepare for a team like that. We worked really hard in practice. Things just didn’t go our way tonight.”

As far as how LaSalle moves on from a loss like this, Marcone said it is simple.

“It is going to be attitude and effort. For us, we just up against a really good team and we’ve got a good team coming in here next Saturday we just have to prepare and understand that we just had a humbling experience.”

Catholic Memorial travels to Algonquin next week while LaSalle hosts Central next Saturday.