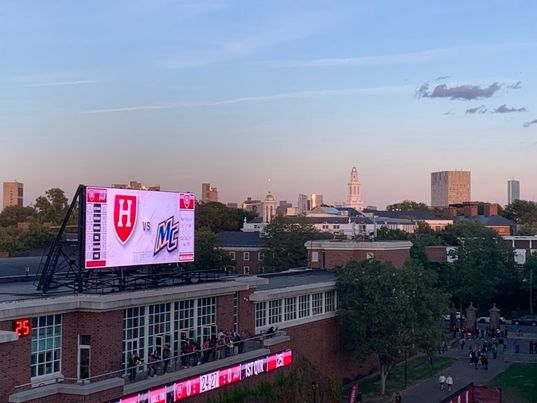 ALLSTON – The backdrop of Harvard Stadium is seldom beaten with the Boston skyline protruding just above its east stand. On Friday night in Allston as the sun set down, the Harvard Crimson complemented the picturesque setting with a thrilling 28-21 come from behind win over Merrimack.

Despite being separated by just 30 miles this was the first time these programs met on the field, leaving the 10,946 in attendance at the very least entertained. For Harvard (1-0) fans, a nervy 3.5 quarters were difficult to watch at times, while the Merrimack (1-2) faithful, who traveled well down from North Andover, were mere minutes away from one of the program’s biggest ever wins.

“I thought that Merrimack did a tremendous coaching job, they outplayed us for most of the game in all phases, and they didn’t necessarily deserve to lose.”

He was quick to give credit to his team that stuck together despite the slow start, which senior running back Aidan Borguet (20 carries, 127 yards, 2 TDs; 2 catches, 39 yards, 1 TD) noted began in the locker room at halftime.

When asked about their season starting later than other teams, Murphy didn’t shy away from its impact on the game. “I’d definitely rather be playing my third game tonight.  I’d rather have had six weeks of practice then four, but the reality is we deal and prepare for this every year.”

If anyone felt that long layoff, it was senior quarterback Charlie Dean (17/32, 162 yards, 1 TD, 2 INTs), who was returning from an injury that sidelined him for the second half of the 2021 season after getting hurt in Harvard’s fifth game. Still, Murphy spoke confidently after the game about his signal caller’s performance, who dealt with pressure from a Merrimack front seven that was in his face nearly every snap on the night.

The Harvard rushing defense picked up right where it left off in 2021 with an incredible final stat line of -26 rushing yards on 28 carries. While Merrimack quarterbacks were largely responsible for the negative tally, all four Warrior running backs combined for 23 yards on 15 carries.

Warrior sophomore quarterback Jack Zergiotis (22/42, 218 yards, 2 TDs), a UCONN transfer, made some incredible throws throughout the game. Sophomore wide receivers Hayden Fisher (5 catches, 86 yards, 1 TD) and Jacari Carter (7 catches, 66 yards, 1 TD) made up for the lack of a ground game.

A largely uneventful first quarter made way for an early score in the second, with Jacari Carter catching a five yard out for a 7-0 lead. The 11 play, 79 yard drive was impressive from Zergiotis, who similar to Dean, was under pressure all night from the Crimson front seven.

Harvard would tie the game 7-7 on a Charlie Dean two yard run a few minutes later, but the Warriors aided the Crimson offense with three crucial penalties. The drive began with what looked like a three and out, before a costly roughing the passer call breathed life back into the offense.

The adjustments each team talked about making at halftime took some time to adjust, as five straight combined punts from both teams, followed by two erratic interceptions from Charlie Dean, finally gave way to the third quarters first points. A beautiful 76 yard strike from Jack Zergiotis put the Warriors up 13-7, though sophomore Lliam Davis would miss the extra point.

With another poor Harvard offensive possession to begin the fourth quarter, a bad snap that went sailing over sophomore punter Sebastien Tasko’s head landed the Warriors with great field position. Merrimack made quick work from the mistake with another Zergitotis touchdown pass, followed by a successful two point try that put them up 21-7.

With 7:02 remaining, a gritty Harvard drive that included a successful fourth down attempt saw Aidan Borguet finally blow open the Merrimack defense for a 48 yard touchdown run cutting the lead to 21-14.

A poor three-and-out possession for the Warriors gave the Crimson excellent field position, and a quick two-play, 41 yard drive ended with Borguet rushing for his second touchdown of the night, forcing overtime.

On Harvard’s first play – a reverse pass to Borguet from Dean – put the Crimson up 28-21, and the Harvard defense continued its stalwart second half with a slam-the-door-shut effort on Merrimack’s lone possession to seal the win.

While it wasn’t the start that Harvard wanted, Murphy and his guys will take a 1-0 record with a trip to Brown on the horizon next week. For the Warriors, they’ll be wondering what if, knowing an upset was so close in their grasp. Dan Curran’s gritty crew travels to Delaware State next week.