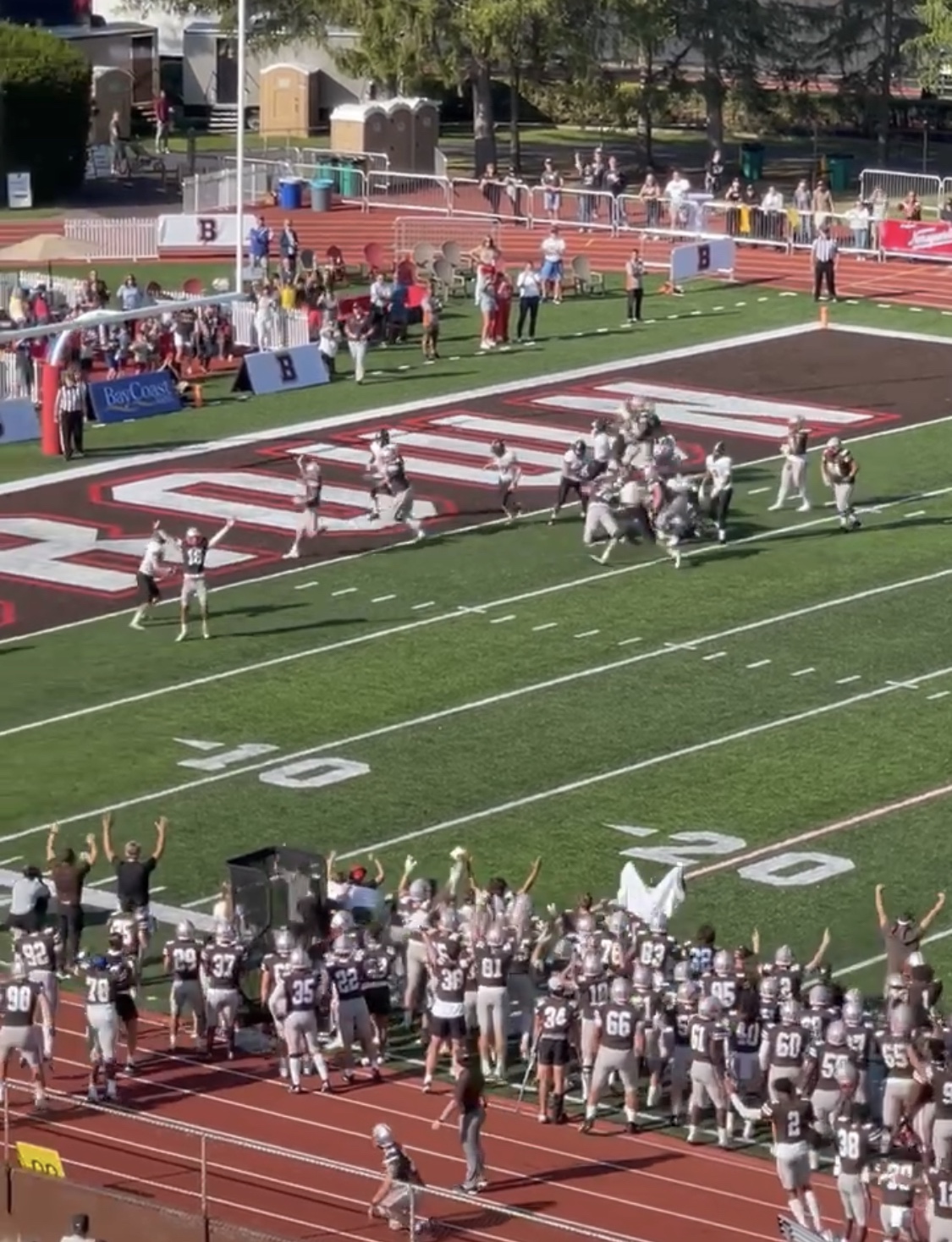 PROVIDENCE- It was a tale of two halves for the Brown Bears offense in Saturday’s season opener against Bryant. The Bears struggled in the first half thanks to four turnovers. The second half however was a different story.

Despite their first half struggles, the Bears opened the scoring, going up 3-0 on a 39 yard field goal from Christopher Maron. The Bulldogs responded on the ensuing kickoff however when Anthony Frederick returned the kick 100 yards for a touchdown. The Bulldogs tacked on a 26 yard field goal from Ethan Gettman and a took a 10-3 lead into halftime.

The Bulldogs would extend that lead in the third quarter when quarterback Zevi Eckhaus hit tight end Jihad Edmond on a 40 yard touchdown pass. Down 17-3, the Bears were facing some early season adversity and they responded.

On the ensuing possession, quarterback Jake Willcox (26-39, 356 yds, 3 TD’s 3 INT’s) drove the Bears to midfield and running back Jordan Delucia did the rest going 50 yards up the middle for a touchdown to cut the Bulldogs lead to 17-10.

Four minutes later however, Bryant would strike again. This time Eckhaus hit Frederick in the right corner of the end zone on a 24 yard touchdown pass to extend the Bulldogs lead to 31-17. Most teams would have folded down two touchdowns at the end of three quarters but the Bears proved they are a resilient bunch.

Brown opened the scoring in the fourth quarter when Willcox hit wide receiver Hayes Sutton on a 40 yard touchdown pass. The score capped off a four play, 70 yard drive that cut the Bryant lead to 24-17. After the defense did their job and got a stop, the Bears offense would strike again when Willcox hit wide receiver Graham Walker (8-116-2 TD’s) along the left sideline on a 30 touchdown pass. The extra point was blocked however setting up some late game drama.

The Bulldogs responded by putting together a drive of their own and capped it off with a two yard touchdown run by former quarterback Ryan Clark. After hitting the extra point, Bryant led 31-23 with 2:30 left in the game.

You would think most young teams would panic under that pressure but the Bears didn’t. Willcox methodically drove them down the field and an Allen Smith touchdown and a two point conversion pass to Wes Rockett tied the game at 31 apiece.

The game went into overtime and the Bears scored first when Willcox hit Walker for a second time along the right sideline for a 25 yard touchdown pass. Maron banged home the extra point and the Bears took 38-31 lead. Bryant would respond on their first opportunity of the first overtime when Eckhaus hit A.C White on a touchdown pass and with the extra point, the Bulldogs tied the game at 38.

Going into the second overtime, you knew one of the defenses was going to have to step up and make a stop. Not many people would have put their money on the much maligned Brown defense but the Bears stepped up and made a huge fourth down stop to set up the Bears to win the game on their possession.

The Bears did that as Smith hit pay dirt three plays later on a short touchdown run to complete the comeback.

After the game, Bears coach James Perry focused more on the process and how his players played but he was still proud of them and their effort.

“I’m really proud of our players. To play your first game against an excellent football program, someone we have immense respect for, an incredible football game and to watch us finish it for the guys next to me and the guys in the locker room, I am really proud of them.”

For Bryant, it was yet another bitter overtime defeat. Bulldogs coach Chris Merritt expressed disappointment in his team’s inability to close out games thus far this season.

“You’d think with the guys we have back, we’d know how to win. Quite honestly, these kids do know how to win. Today, I give Brown credit. They made the plays they needed to make. But we simply beat ourselves.”