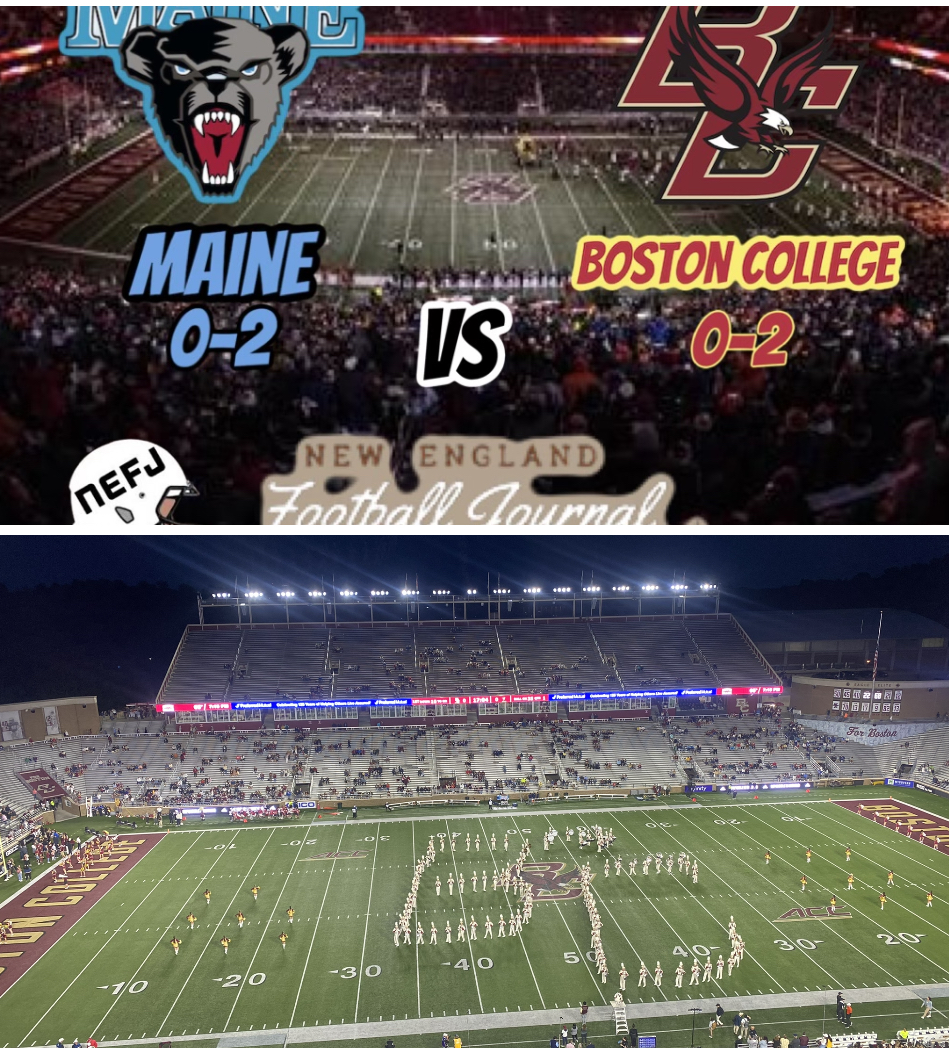 CHESTNUT HILL – For the third straight week, Boston College found itself with another opportunity to get in the win column.

After a couple ugly losses, the Eagles finally took advantage this time, delivering a 38-17 victory for the home crowd at Alumni Stadium over the University of Maine Saturday night.

The win did not come easy out of the gate though.

To open up the game, Maine’s defense made it very difficult for the Eagles, which resulted in back to back drives ending in punts. Following the second punt, Maine kicker Cole Baker (Wrentham, MA) nailed a 45 yard field goal, giving the Black Bears an early 3-0 lead in the first quarter.

The Eagles struck right back.

“That’s what explosive players do,” BC head coach Jeff Hafley said on his receiving core. “(Phil) Jurkovec played really well, had over 300 yards, we had four receivers over 30 yards. It was a nice night for our offense.”

On the following play Trevin Ewing took back the ensuing kickoff 73 yards, getting the Black Bears back in it. Two plays later, Shawn Bowman caught a 17 yard TD pass from Joe Fagnano, giving the Black Bears a 10-7 lead late in the first quarter.

The Eagles then came back with another big play of their own, as Jurkovec found Jaden Williams on a 53 yard completion deep into Black Bear territory. Jurkovec finished the drive with a two yard touchdown pass to tight end George Takacs, giving the Eagles a 14-10 lead heading into the second quarter.

BC found their groove in the second quarter, outscoring Maine 14-0, including touchdowns by Williams (9-yard run) and Pat Garwo III (one yard run).

The Eagles defense matched the offenses’ success in the second quarter. Not allowing any points from the Black Bears, while defensive end Marcus Valdez (sack) and Jason Maitre (interception) made big plays when needed for the home team.

Coming out of halftime, the Eagles moved the ball down the field, but couldn’t punch one in. Settling for a Connor Lytton 46 yard field goal that gave BC a 31-10 lead.

BC put the nail in the coffin when line backer Kam Arnold intercepted Fagnano, returning it 49 yards deep into to Black Bear territory with 5:00 left to play. The Eagles kept the Black Bears off the scoreboard for the remainder of the contest.

Boston College (1-2, 0-1 ACC) will be on the road next Saturday, September 24 against ACC opponent Florida State at 8 p.m. in what should be another hostile environment. Maine (0-3) will next host CAA foe Villanova on Saturday, October 1 at 1 p.m. looking to get Jordan Stevens his first win as head coach.