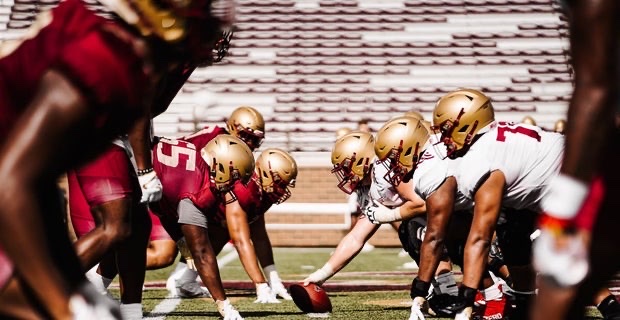 Fans are a lot less patient than coaches. That’s why they’re fans.

It’s no secret that the Boston College offensive line has struggled early this season. But, there are a bunch of factors going against the guys up front right now that many fans are just glossing over while immediately making outrageous statements about 18-20 year old kids.

Youth and inexperience is at the forefront of the problems right now. You can’t teach either of them and there’s nothing that can be done about it other than playing ACC football and adjusting to the game around you. Is it an ideal situation for a quarterback looking to put some good stuff on tape for the NFL Draft? No, but it is what it is.

The expectations and pressure heaped on this group following arguably the greatest class of linemen in BC history was a bit much too. We here at NEFJ were guilty of it like many that rock the maroon and gold every Saturday, but it’s hard to play offensive line at any level, let alone this level. These guys were going to need time and when you’re following Alec Lindstrom, Zion Johnson, Ben Petrula and Tyler Vrabel – a unit that could communicate together in their sleep – you’re in a no-win situation. Christian Mahogany was a part of that group last year and his injury – along with injuries to Ozzy Trapilo and Kevin Cline – have been killers. Mahogany’s leadership and All-ACC playing ability would obviously take pressure off everyone else.

Despite the crisis in confidence from the fan base, head coach Jeff Hafley is 100% behind his guys.

“Those guys are working hard man, they really are,” Hafley said Tuesday. “If you want to rewind where some of those guys were this spring, when we hit the spring…Drew Kendall, Christian Mahogany – one of the best guards maybe in all of college football – Finn (Dirstine) had a great spring, then you have Ozzy, you have Kevin, you have (Jack) Conley, some of those guys weren’t even there. All of the sudden, Christian goes down, Ozzy goes down and then Kevin goes down. Drew misses a lot of camp. Those guys are fighting.

Hafley also discussed why it’s not as simple as just dipping into the transfer portal for a quick-fix solution.

“After spring, we felt great,” he said. “Then we found out late Christian got hurt. So, yeah, we looked at the portal for a lot of reasons. You want to add depth, you always want to add good players, but it’s not that easy. When you look at the portal and certain positions…one, can a guy get into school here? Two, does he have enough credits to transfer in and be eligible to play by NCAA rules? Three, is he a character kid? Obviously, is he good enough? That’s huge.

“The other part that comes into it with an offensive linemen is how much money is he going to get paid? So, we’re doing everything we can, but I believe in the guys we have here and some of them, are they totally ready? We’re going to get them ready and we’re going to fight our butts off. I’m going to be behind that group every step of the way.”

Zay Flowers – who gave up six figures to play one final year at BC – could have every right to be annoyed or frustrated with the situation the team is in, but he too is behind the guys blocking up front.

“The O-line is a new O-line, so they gotta’ get used to playing, they’re inexperienced,” he said. “A few games in, they’ll be alright, they’ll start learning, start communicating better and having a feel for each other…I feel like we’re doing fine, we’ve just got to get off to some faster starts.”

For better or worse, the O-line isn’t changing anytime soon. Guys will improve with time and there’s a reason each of them received Division 1 offers from other big time schools. If there’s any program that can get this figured out, shouldn’t it be O-line University?