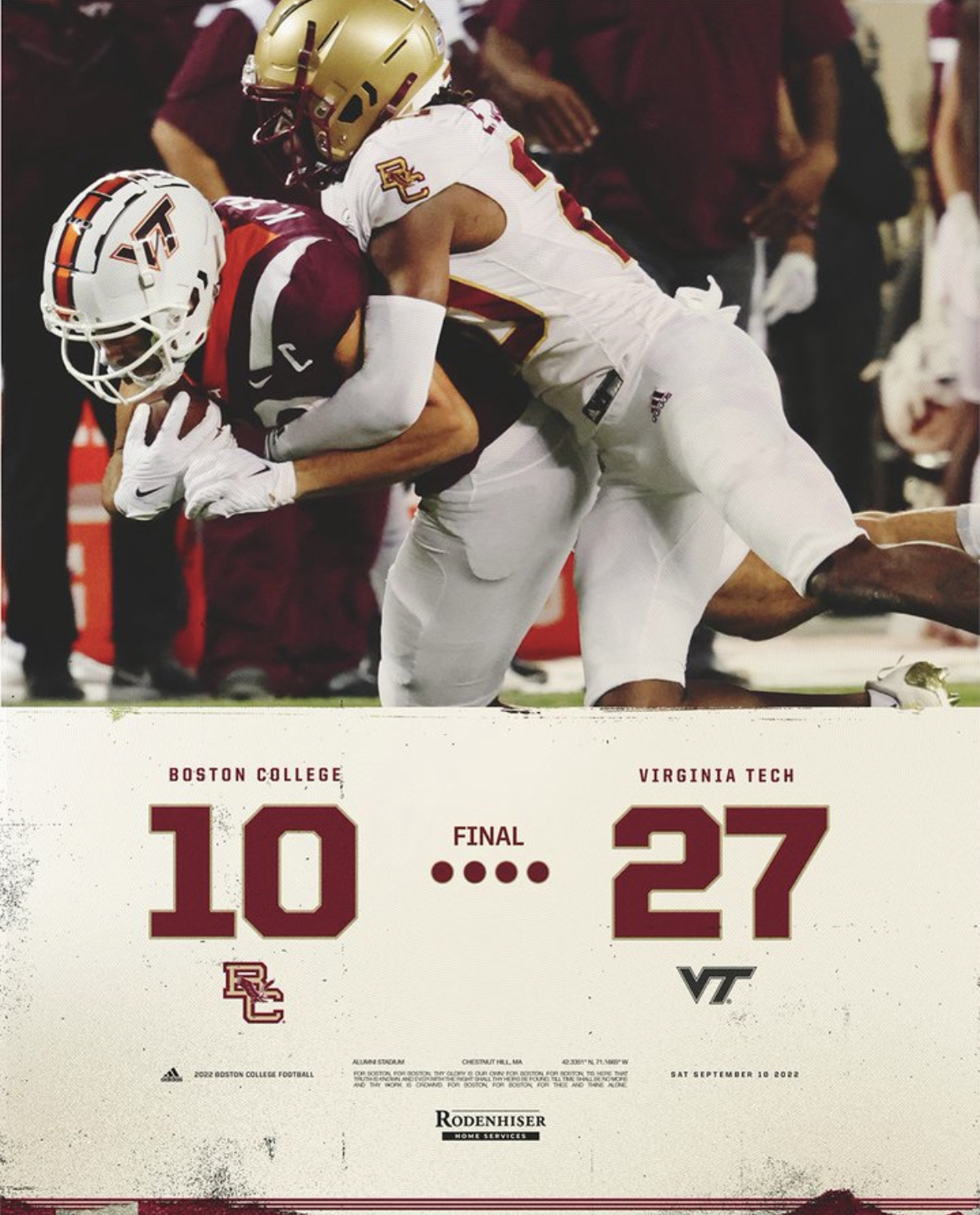 It’s only two games, but it feels like the season is already slipping away for BC.

The offense could only muster 155 total yards in an ugly 27-10 loss to Virginia Tech on Saturday night at Lane Stadium. The Boston College defense kept it a ball game for as long as it could, but they ended up giving up a back-breaking drive late while a banged up and young offensive line just couldn’t protect Phil Jurkovec for a second straight week.

Before the game, Ozzy Trapilo was ruled out with an injury, forcing Dwayne Allick into his first career start at right guard. Add that to the continued absence of Christian Mahogany and there’s just no quick-fix for Jeff Hafley, offensive line coach Dave DeGuglielmo or offensive coordinator John McNulty.

“We’ve got to get better,” Hafley said postgame while facing an 0-2 start for the first time as a head coach. “Coaches and players, we have to get better. I told them not to point fingers offense vs. defense. I told them we’re all in this together and when things get really hard you either get tighter as a team and figure it out or you go in the opposite direction.

“These guys will fight, they will, they’re going through a tough time right now. We have a lot of football left to play.”

Jurkovec was picked off on the second play of the game and after a great return, VT was up 7-0 early on a short TD run. A 49-yard field goal with 48 seconds left made it 10-0 Hokies after one while the BC offense struggled to string two consecutive positive plays together.

A 65-yard TD run for Keshawn King early in the second put the Eagles in a 17-0 hole before the offense finally found a little rhythm. Jurkovec led a 16-play, 65-yard drive that ended with a Connor Lytton field goal before halftime.

The defense came out and got a stop on the first possession of the third quarter and BC put another good drive together using tempo, this time moving 86 yards in six plays. Jaden Williams hauled in a 17-yard touchdown with 5:18 left, cutting it to 17-10.

The Hokies all but iced the game with a 10-play, 79-yard response drive, finishing it off with a Grant Wells 2-yard touchdown reception. Will Ross hit a 38-yard field goal late for Virginia Tech. Emmett Morehead accounted for 16 of the yards in the final moments after Jurkovec was battered around all night.

“Can’t get him hit like that, ball’s got to come out, we have to find a way to run the football,” said Hafley. “We cannot get Phil hit like that, can’t happen.”

Jurkovec was sacked five times and hurried five according to the box score, but it’s almost every snap at this point.

“Yeah, it’s frustrating,” Jurkovec said of the continued hits. “They’re taking shots, taking hits, that’s obviously (Virginia Tech’s) game plan, that’s what they’re trying to do. You just gotta keep moving forward onto the next play. I tried to get the ball out today a decent bit, so, all you can do is just keep going. I have faith in those linemen. They’re young but they’re going to be better.”

The lack of a running game (four yards total on 26 team attempts) is glaring and there’s no easy or quick way to teach experience to the new offensive line. This is going to be about health and reps at the D1 level whether the fans like it or not.

“We were running the ball well there (during the field goal drive before halftime), we had a couple nice runs there. We’re going to find a way, I’m not sure, you’ve got to ask the coaches on that one, but we’ve got to find a way to run the ball,” Jurkovec added.

Is there anything that can be done differently as BC prepares for what should be – nothing is guaranteed at this point – a relatively easy victory against Maine next weekend under the lights at Alumni?

“I’d like to practice harder,” said Jurkovec. “Try to make it more competitive, because it seems like we get into games and we’re just a little bit off. Plays that we’re hitting in practice…I was a little bit off early in the game, but…that’s it.”

“I think overall we just have to perform better,” said Jaiden Woodbey. “Being quite honest, I just think we have to be able to play for each other even more. I feel like we are, but it just has to be for 60 full minutes. I think that was the same result as last week, we just have to play together for all 60 minutes and have a full game.”

Danny Longman’s 76-yard punt was one of the highlights of the night for this Eagles team that is struggling to find answers right now. A booming punt as one of the team highlights in a league game on national television is a scary reminder of just where the Eagles are at right now.

It’s hard to believe the season will stay on this path through November, but something needs to change very quickly to avoid a bad-to-worse situation.

“As a team, we’ve just got to come together,” said Kam Arnold. “We can’t split off and go separate ways and everyone pointing fingers at each other. We just have to come together. We have to understand this is a team loss. We didn’t execute well in all phases.