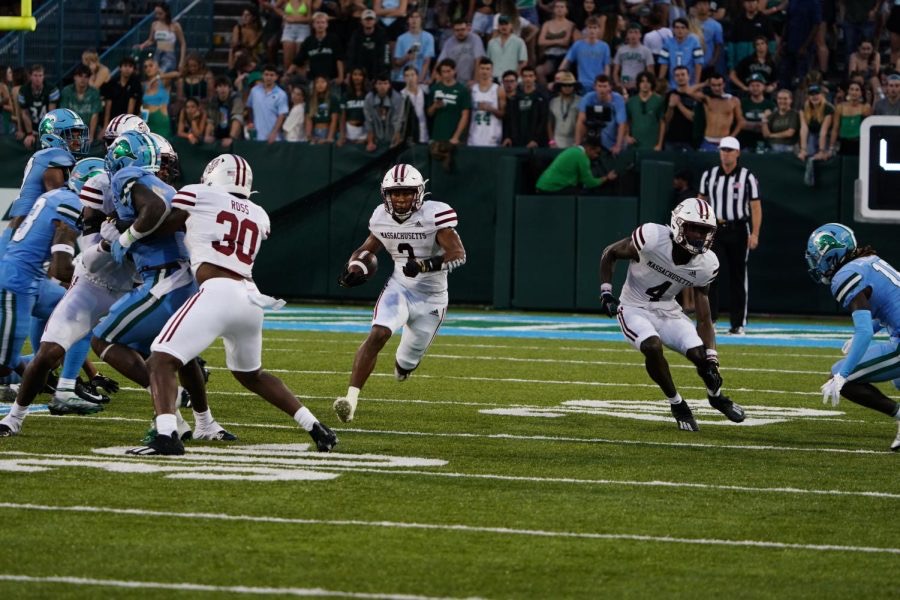 
This UMass rebuild is a process. The first step in that process after falling on the road against Tulane in the opener was correcting mistakes.

This isa somewhat obvious statement, but for a program still learning what works best for them moving forward, it’s a step that can’t be rushed or overstated.

Those corrections began Monday and then continued Tuesday before the Minutemen set their sights on another tough opponent in Toledo on Saturday night. The Glass Bowl will be a tough environment for UMass to try and earn the first win in the new Don Brown era.

“The thing we’re trying to do is continue taking a look at what we’re doing and correct the mistakes first,” Brown said in his weekly availability on Wednesday night. “You can’t just throw new scheme on top of new scheme. We’ve only been together in a limited time, so the bottom line is when you start like we did in February, everyone’s learning from scratch at that point. It’s not like you have upperclassmen who can council the younger guys. Everybody has to learn from the same standpoint.

“The first thing is correct your mistakes, then take the things within your scheme that can help you in the new challenge, but is simple enough that our guys won’t have to digest a brand new scheme. You can put yourself in double duty there if you’re not careful.”

Brown talked about the process he uses in terms of breaking down film and then how the staff approaches those corrections with various position groups while also balancing working on the new game plan for that particular week.

Linebacker Jalen Mackie also touched on this new process for the Minutemen and what the defense learned from last week.

“First and foremost you have to go and review your mistakes,” he said. “We broke the film down as a defensive unit, we broke the film down as a position group getting more into the specifics. I think our coaches did well to point out how a lot of the plays it was just one or two errors leading to bigger mistakes. Just getting those areas corrected is something we were harping on and then after we had all our mistakes corrected and discussed what went wrong in the game, we put it in our rearview mirror.

“It’s gone, it’s in the past. We look forward and move on to Toledo.”

Running back Tim Baldwin believes the offense will only continue getting better and eventually show what it’s really capable of as the season moves on, but it’s a week-to-week thing.

“At the end of the day, it’s whatever you feel you need to win, whether that be multi dimensional or running the ball,” Baldwin said. “That changes game to game and whatever the coaches feel is best I trust everyone…whatever works is fine with me.

“We’re all a family at the end of the day. You always want to put yourself on the line for your brother..anytime anybody gets on the field we just want to put 100% effort in whatever situation we get put in. Of course, that takes time, that takes trials and some lessons, but at some point whether it be this week, today or tomorrow, it’s all going to kick in.”

In a running back room full of highly skilled guys, the camaraderie amongst that group could be one of the biggest factors in the UMass offense getting humming sooner rather than later.

“Ever since I came, I came up for a spring game and there was a situation when they didn’t know if I could be on the field or not, and Kay’ron Adams was one of the first people to make sure I was okay,” Baldwin said when asked about the relationship in that group. “Ever since I got here on campus me and Ellis have been really tight. We go on trips together, stuff like that. It’s a real friendship, real authentic dialogue. Whatever we feel we’re going to voice it and I think that’s the beginning of a really healthy relationship that we can build on.”

Don Brown has seen and done just about all you can do in football, but he hadn’t coached a road game or seen this particular team and staff go through a game day routine until last week. With that in mind, there won’t be much changing as far as his process goes when the Minutemen head to Ohio, but last week did still provide a bit of a learning experience for him as well.

“We’ll try to go and do our special teams and team meetings on Friday nights a little earlier,” Brown explained. “We’ll definitely do that first, but outside of that I thought we were smooth sailing on the road. It’s not my first rodeo, I’ve been doing this for a long time. In terms of having experience and what to do and how to go about it…the whole thing I strive for is don’t rush the players. I thought we did that for the most part Friday going into Saturday.”